Amalgamated in 1970 from the Worcestershire Regiment and the Sherwood Foresters Regiment, the WFR served Worcestershire, Cheshire, Derbyshire, Herefordshire, and Nottinghamshire, in the Midlands of England. Their battle honours include Northern Ireland, Iraq and Afghanistan. In 2007 the regiment became the 2nd Battalion Mercian Regiment.
Officer's Service uniform of Brigadier R. G. Silk. CBE DL.

Brigadier R. G. Silk was commissioned into the Worcestershire Regiment in 1962 and steadily rose through the ranks reaching Brigadier in 1992. In 1983 he was MID for gallantry and distinguished service in Northern Ireland, and was awarded the CBE in 1989.

From 1992 to 1994 Silk commanded the 143rd (West Midlands) Brigade, and during that period served as Colonel of the regiment. Brigadier Silk retired form active service in 1994, becoming DL as well as the Honorary Colonel of the Hereford  and Worcester Cadet Force. 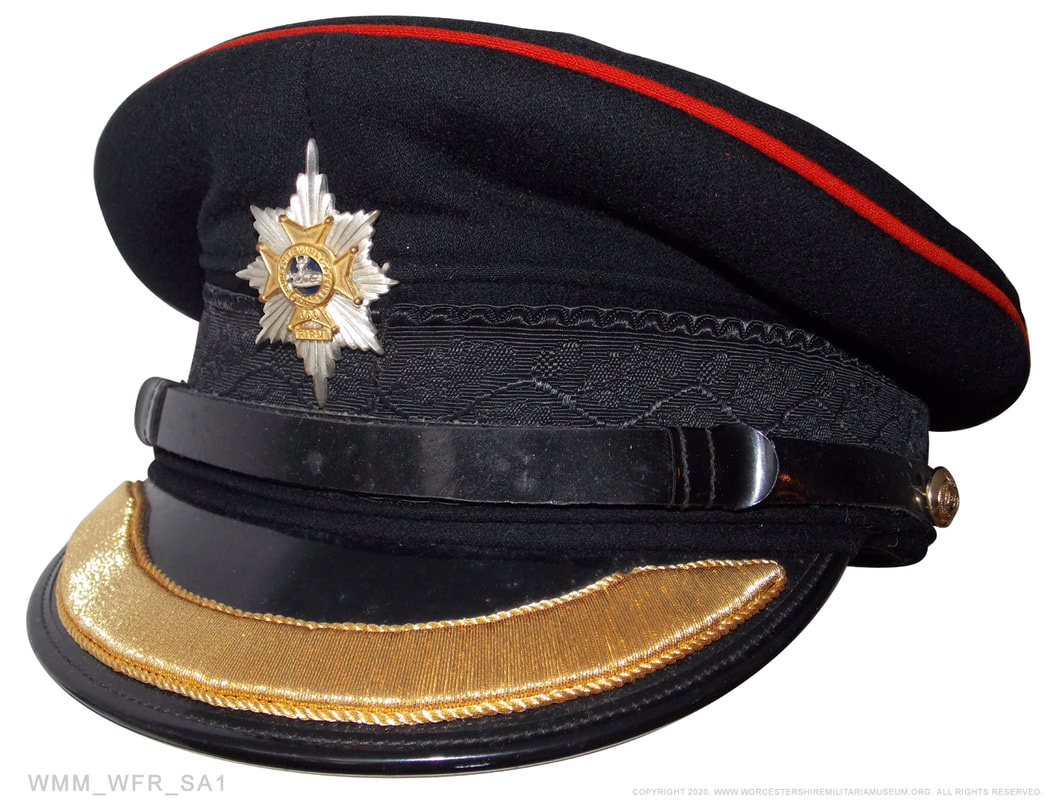 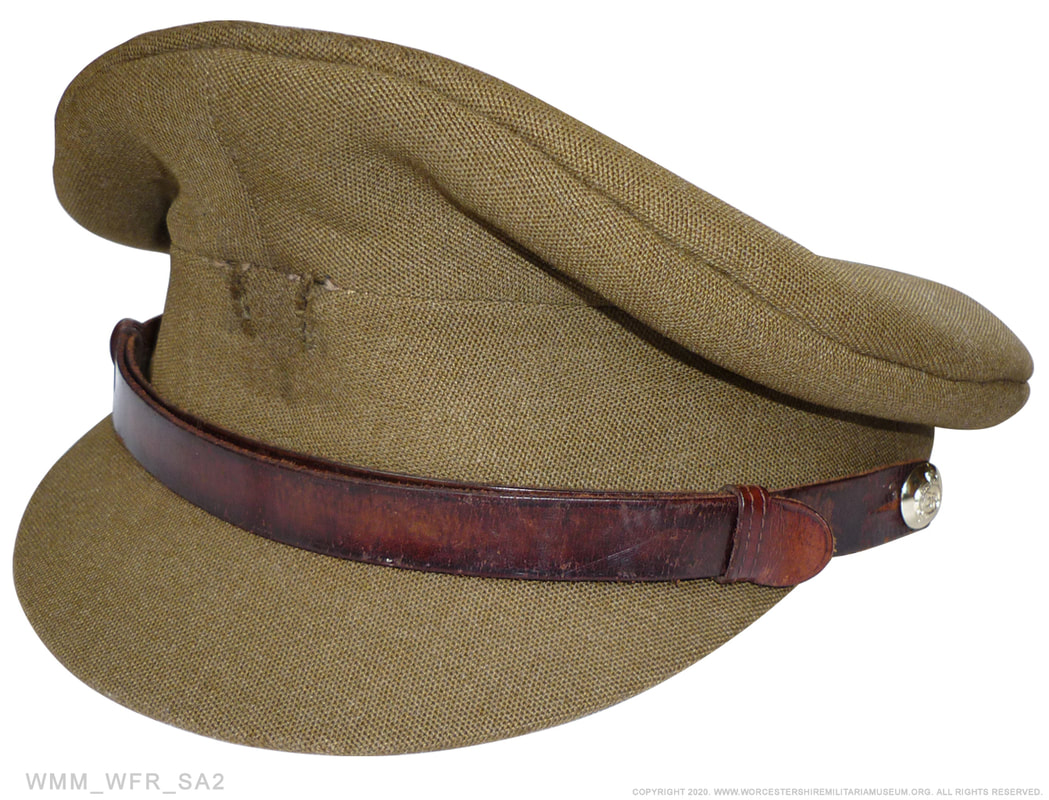 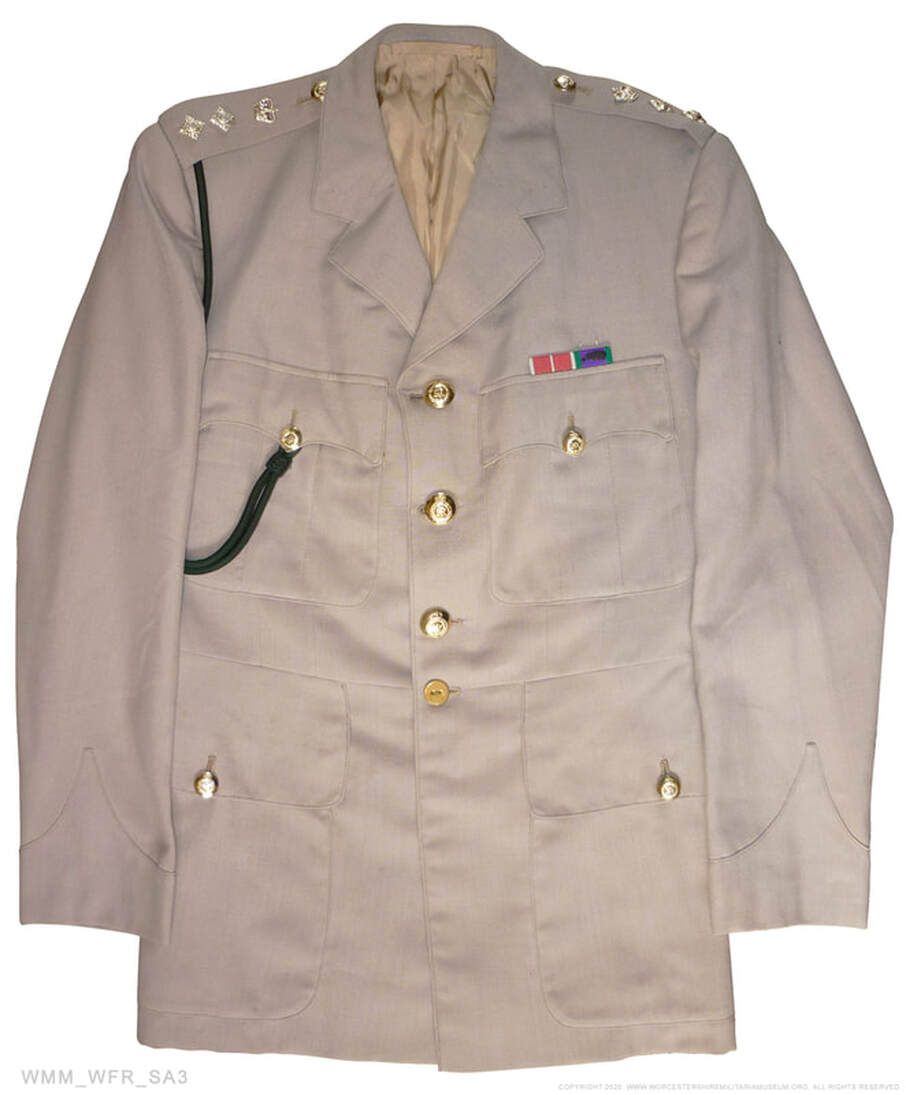 The black removable armband on the left arm is a mourning band and was worn on ceremonies and occasions of mourning. It was found in one of the tunic's pockets.

The officer's SD uniform of the Worcestershire & Sherwood Forester Regiment was basically as that worn prior to 1970. Unique to the WFR, a Lincoln green lanyard was worn on the right shoulder. The use of green reflecting that worn previously by both amalgamated regiments. Other British regiment have their lanyard on the left shoulder. 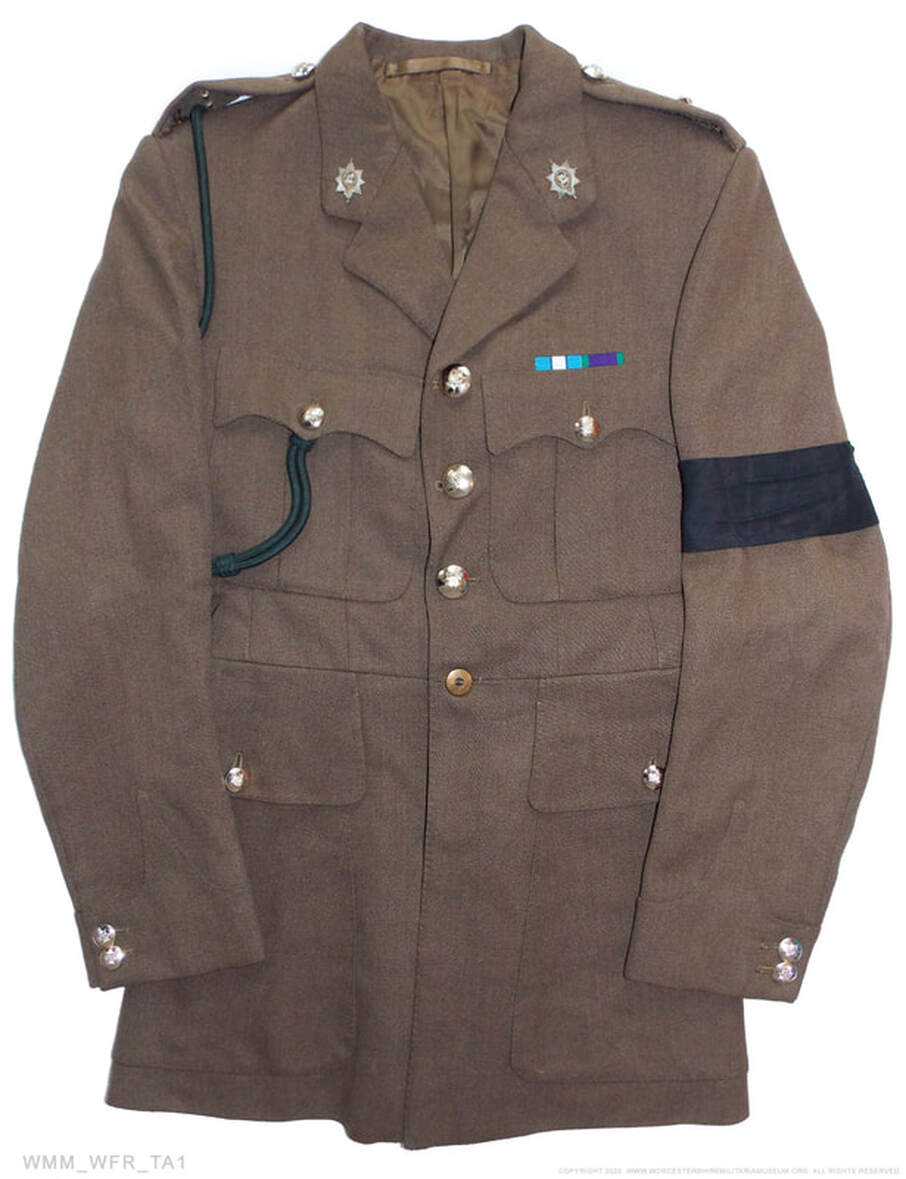 Worcestershire & Sherwood Forester SD tunic.
​Officer's No. 10 Mess Dress of Captain P. J. C. Higgins.
Patrick Joseph Charles Higgins passed out of Sandhurst in late 1967 and joined the Forester Regiment. In 1969 he was promoted to Lieutenant and stayed with the regiment through its amalgamation. He was promoted to Captain in late 1973 before retiring in 1976.

It is interesting to observe that while Higgins retired a Captain the jacket is indeed ranked to a Major, which would point to the probablility of it being sold on to a fellow serving officer. 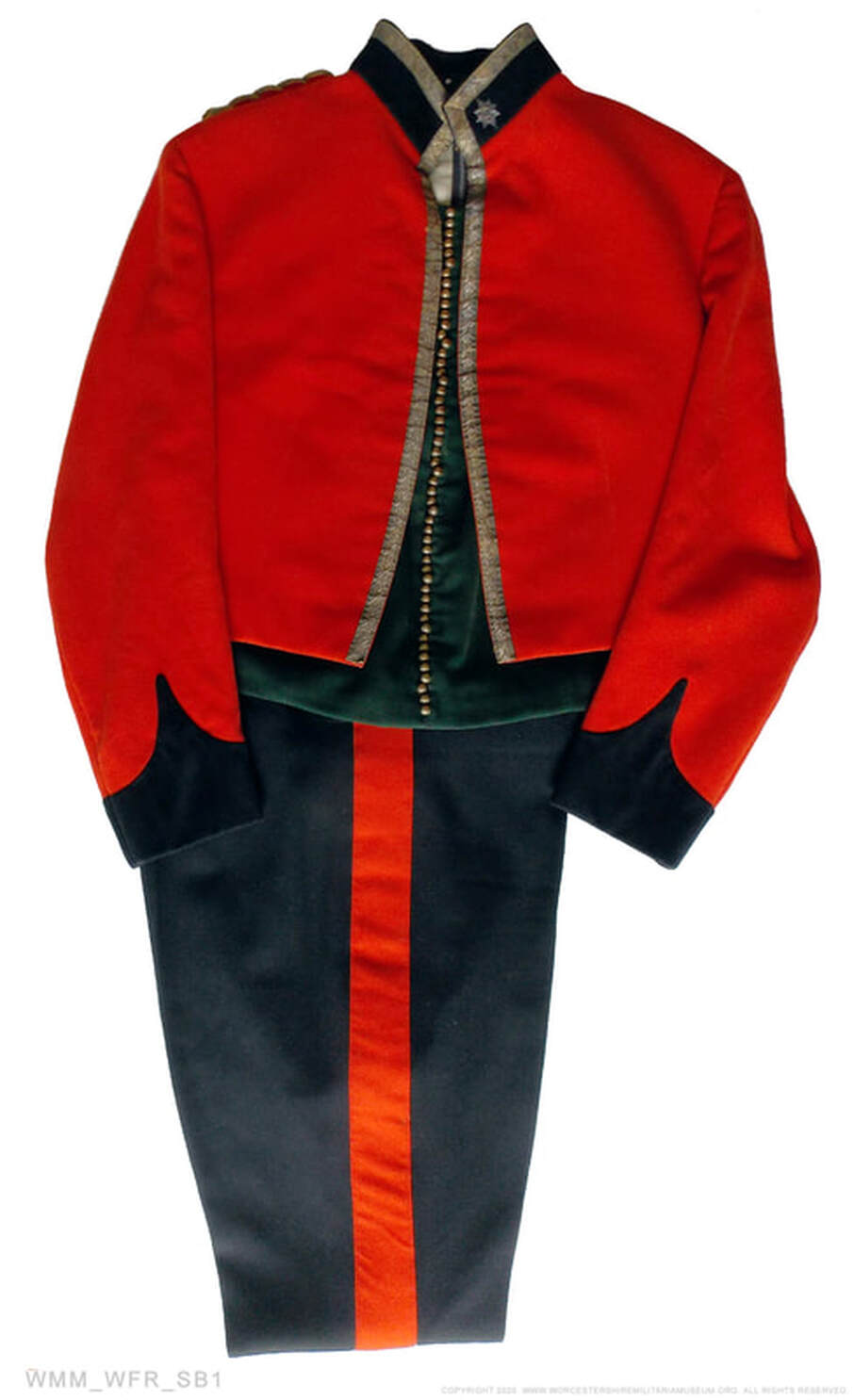 A Worcestershire & Sherwood Forester Regiment coloured side hat, most probably dating to the early amalgamation period. This example is particularly attractive due to its heavy goldwire piping detailing and silver and gilt side buttons. Such hats are quite scarce compared to their Worcestershire Regiment forebearers, and as mention before, were an article of private purchase reserved for non parade barrack dress.

Colonel Patrick Mercer was commissioned into the Worcestershire and Sherwood Forester Regiment in 1975 and steadily rose through the ranks before reaching Substantive Colonel in 1998. After nearly a quarter of a century serving Queen and country he retired from military service in 1999 and began a career in politics, as a Conservative Member of Parliament.

This superbly tailored cap is named and shows evident personalised style, in its short peak and high positioned cap badge. It dates to around 1975, when Gieves Ltd. became Gieves and Hawkes Ltd., and was most probably re-peaked for Field Officer status when Captain Mercer was promoted to Major in 1988. 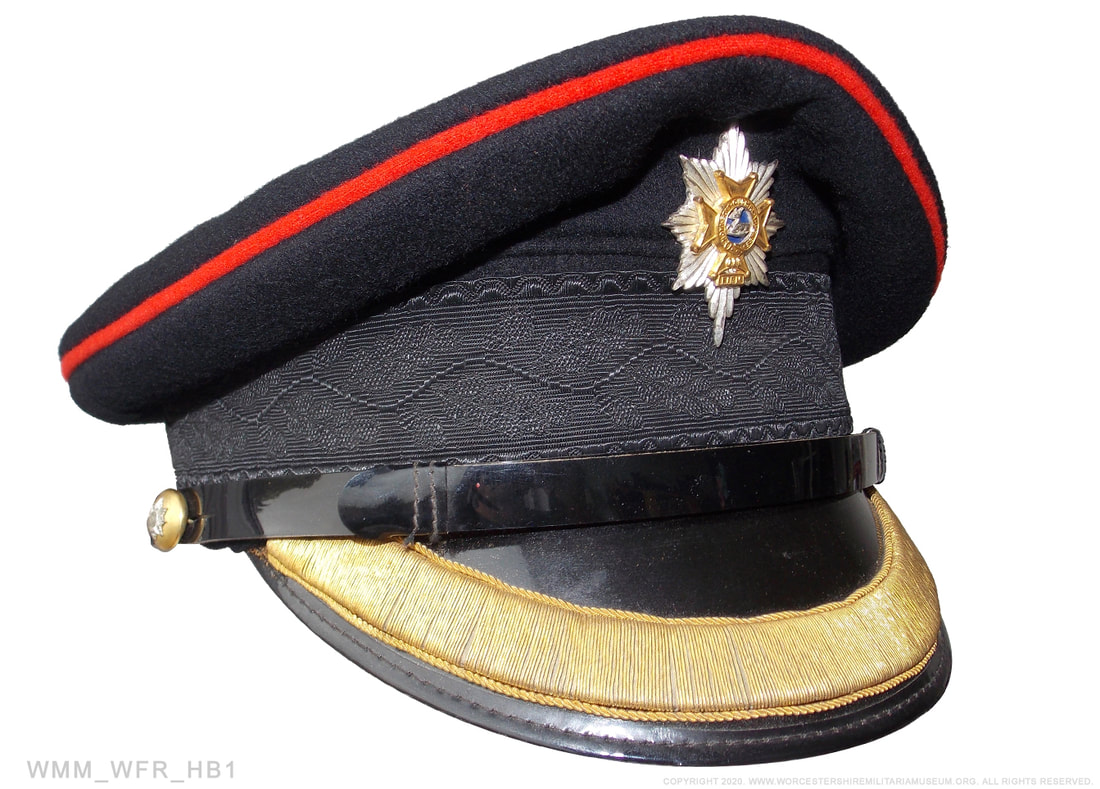 This beret and accompanying rank slides and badges belonged to a Major in the Worcestershire and Sherwood Foresters. Not much is known about this officer other than he served with the Sherwood Foresters (Nottinghamshire and Derbyshire Regiment) prior to the amalgamation in 1970, perhaps joining as an enlisted man before being commissioned. Of interest is the collar badge worn on this beret, as opposed to the standard cap badge, a detail favoured by officers, especially in the Worcestershire Regiment on the side hats. The font of the rank slides is also interesting to compare.
3D interactive exhibit! Hold the mouse button over the cap to move it. 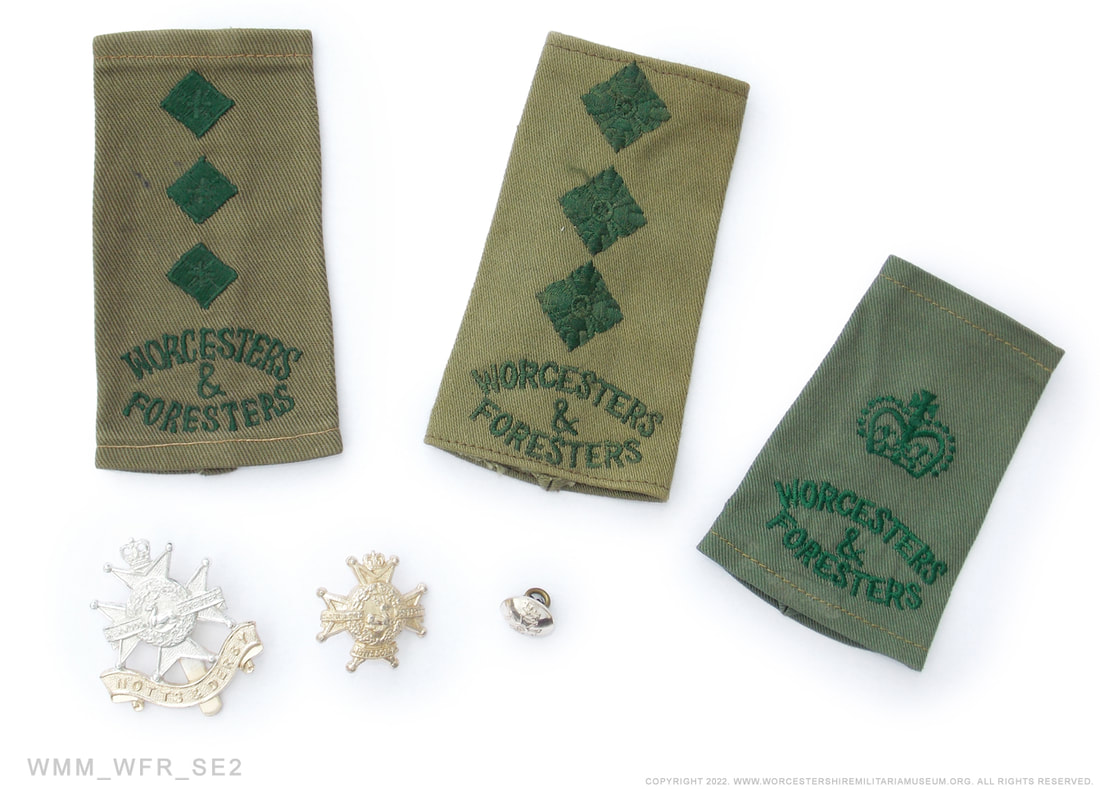 Major Ireland joined the Worcestershire Regiment as a Lieutenant in 1956, coming from the Suffolk Regiment. In 1964, now an Adjutant Captain, he was a member of the 1st Battalion, Worcestershire Regiment, which along with a compliment of men, was posted to Dominica, in the West Indies, as part of "Exercise Rum Jungle". Captain E. A Ireland was promoted to Major in 1966 and retired at that rank in 1987.

More information and a picture of this Officer can be found at the excellent Worcestershire Regiment Website here. 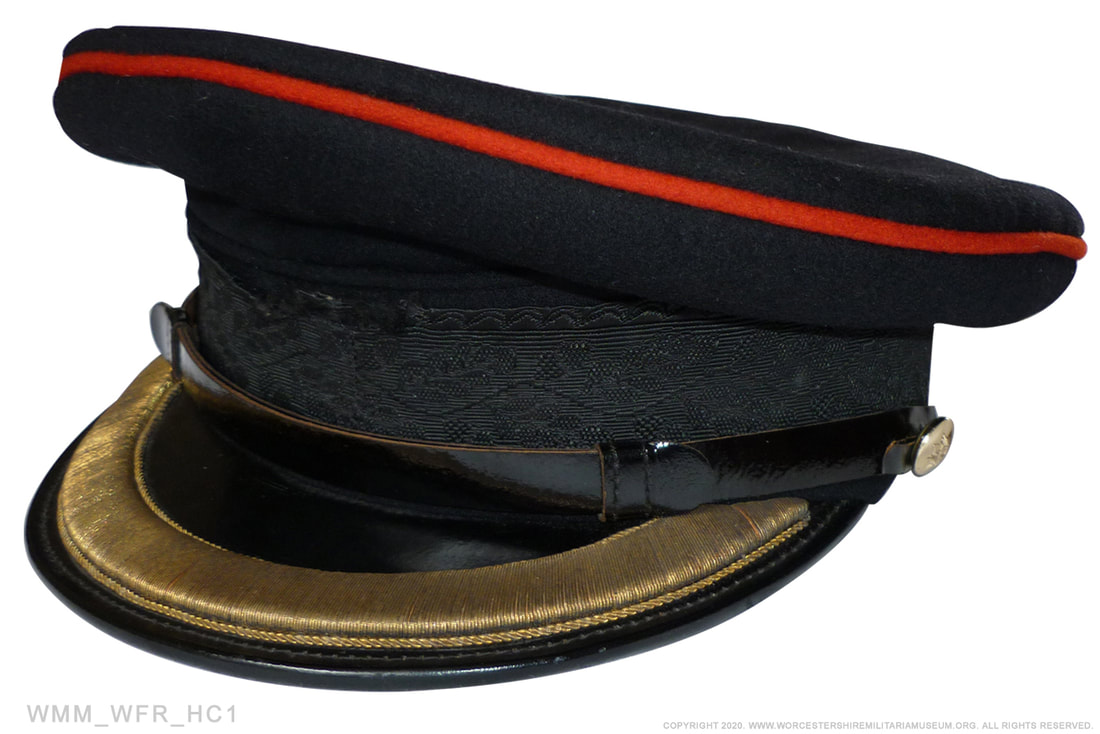 Prior to joining the regiment, as a junior officer of the Territorial Army in 1988, Mawby served with the WFR A.C.F. In 1993 at the rank of Captain (Quartermaster) he resigned his commissioned. This dress cap is in excellent condition and was made by the favoured regimental tailors, Herbert Johnson, as are most WFR officer examples. 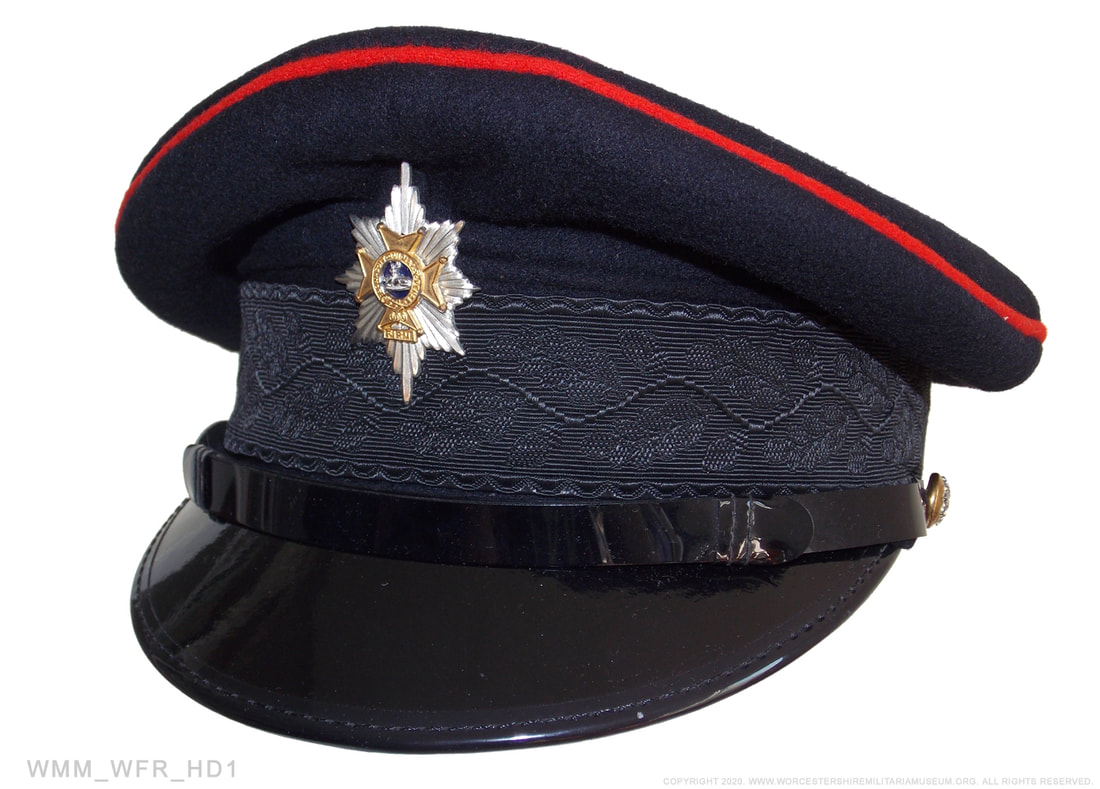 Late 1980s Worcestershire and Sherwood Foresters Regiment Territorial Army officer's cap.
Officer's Forage cap.
This example of a Forage cap was used by Junior Officers, with the No.1 Dress Uniform, until 2007. 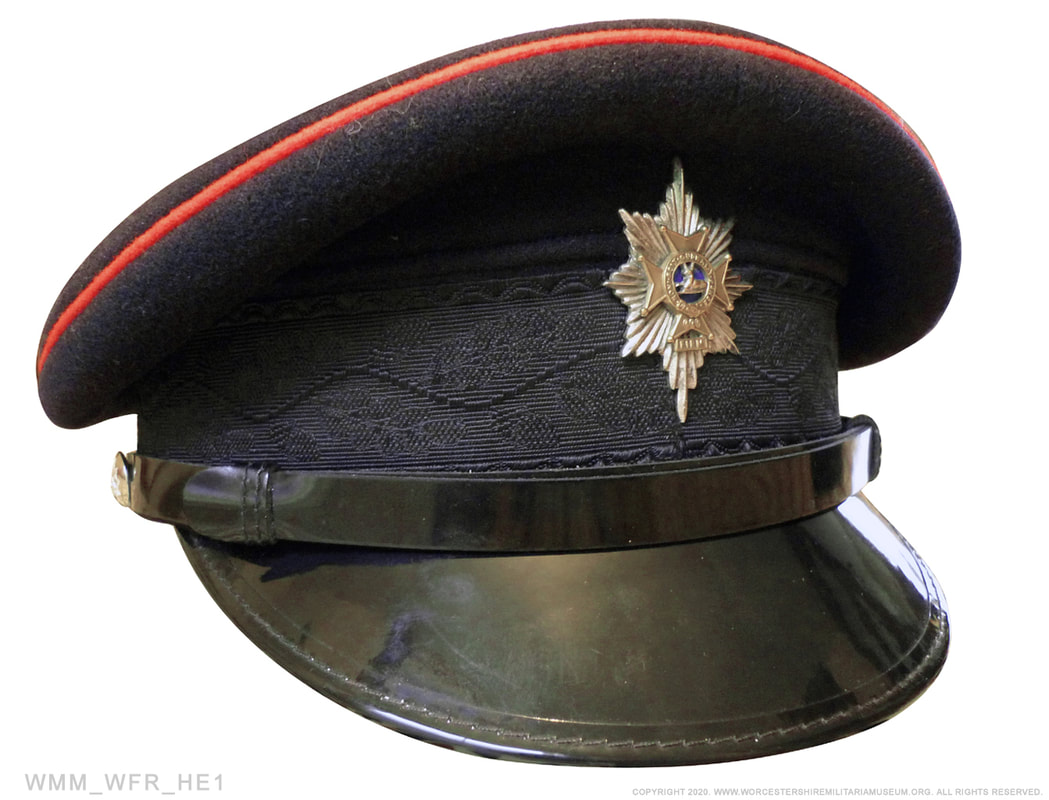 ​An example of a No.1 Dress cap cap worn by Warrant Officer 2nd Class and all lower ranks. The cap style is identical to that used after the amalgamation.

This particular example is interesting and unique as the peak has been shortened and positioned upright, giving it that look typical of those worn by Sergeant Majors. The modification was professional carried out and suggests a depot job. 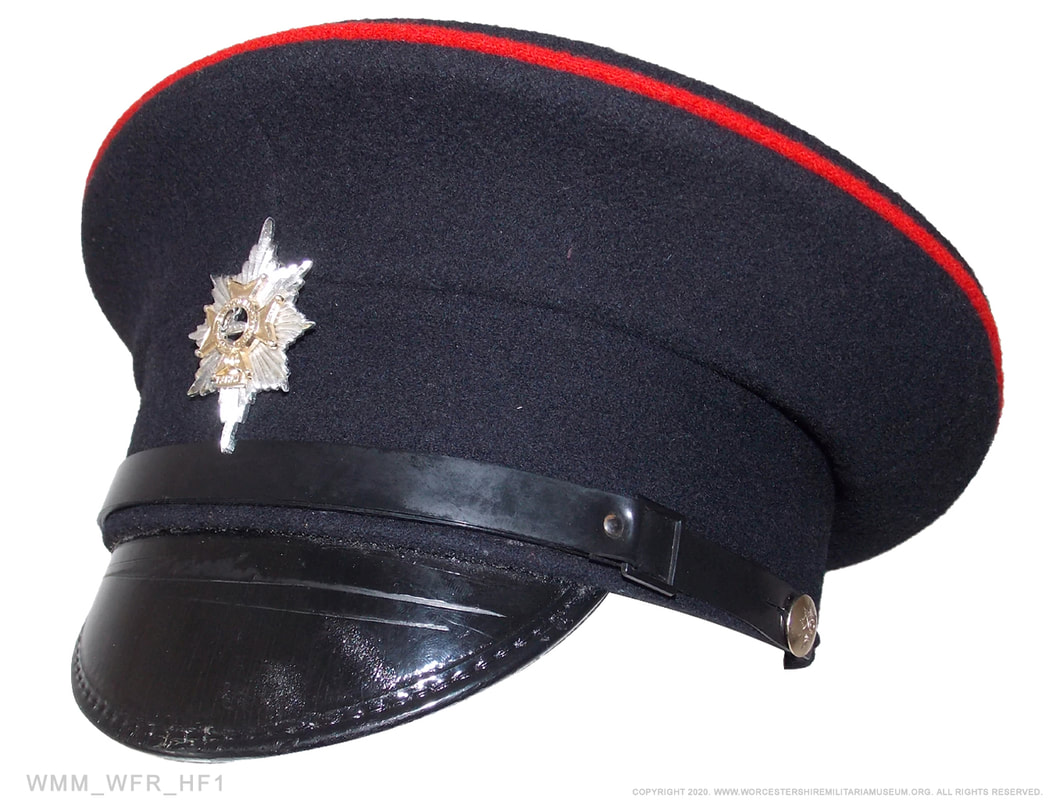 These uniform items came from a member of the 1 WFR who was an NCO during the 1990s, serving on through the amalgamation into 2 Mercian, on operational tours in Northern Ireland and Afghanistan. The brassard is of particularly interest as it was only issued for the UN IFOR peacekeeping mission to Bosnia in 1996, Operation Resolute, when the 1 WFR Battlegroup, equipped with Warrior armoured vehicles was part of the 1st Armoured Infantry Brigade. Also note the coloured beret badge, worn by senior NCOs prior to the Battalion's deployment to the Balkans.

For more information on the 1st Battalion's role in Bosnia during Operation Grapple, consult chapter thirteen of Firm and Forester The History of the Worcestershire and Sherwood Foresters Regiment (29th/45th Foot) 1970-2007 - Tom Blyth. Bannister Publications, 2009.
​ 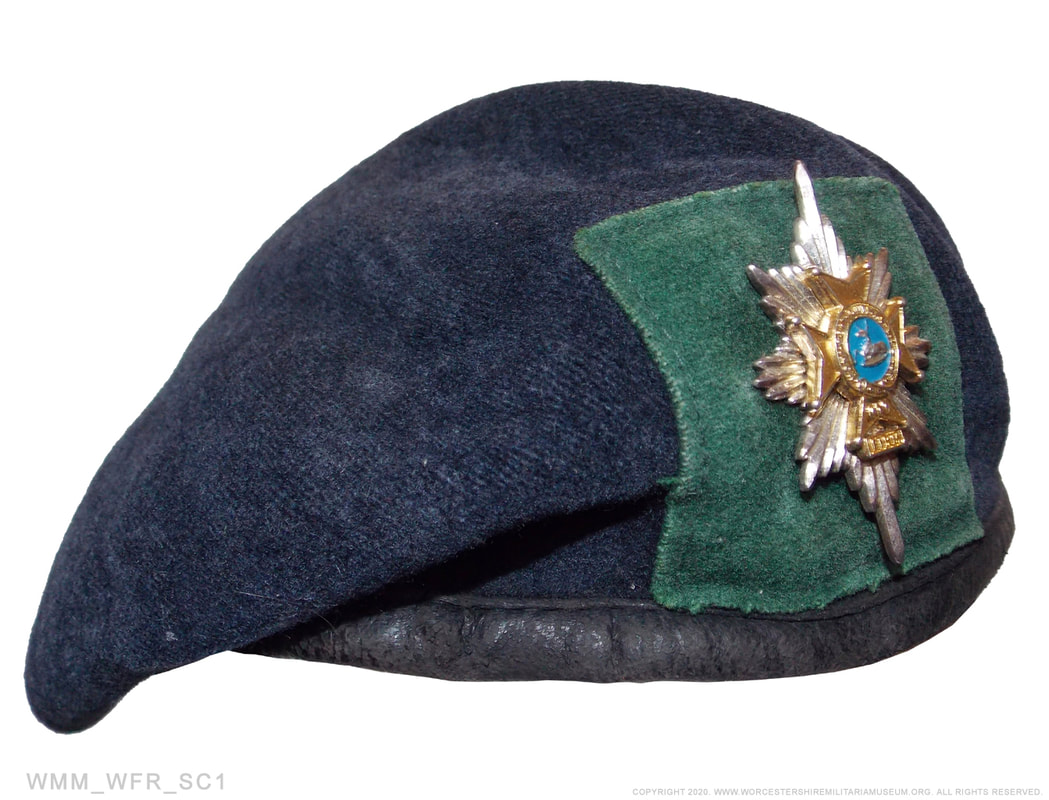 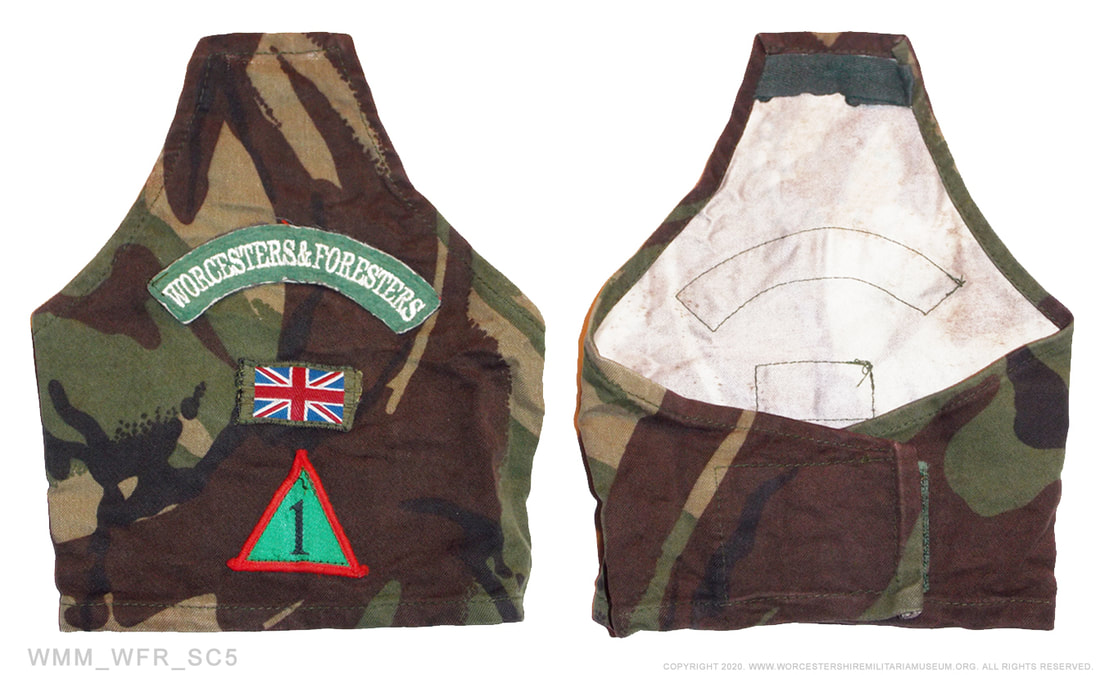 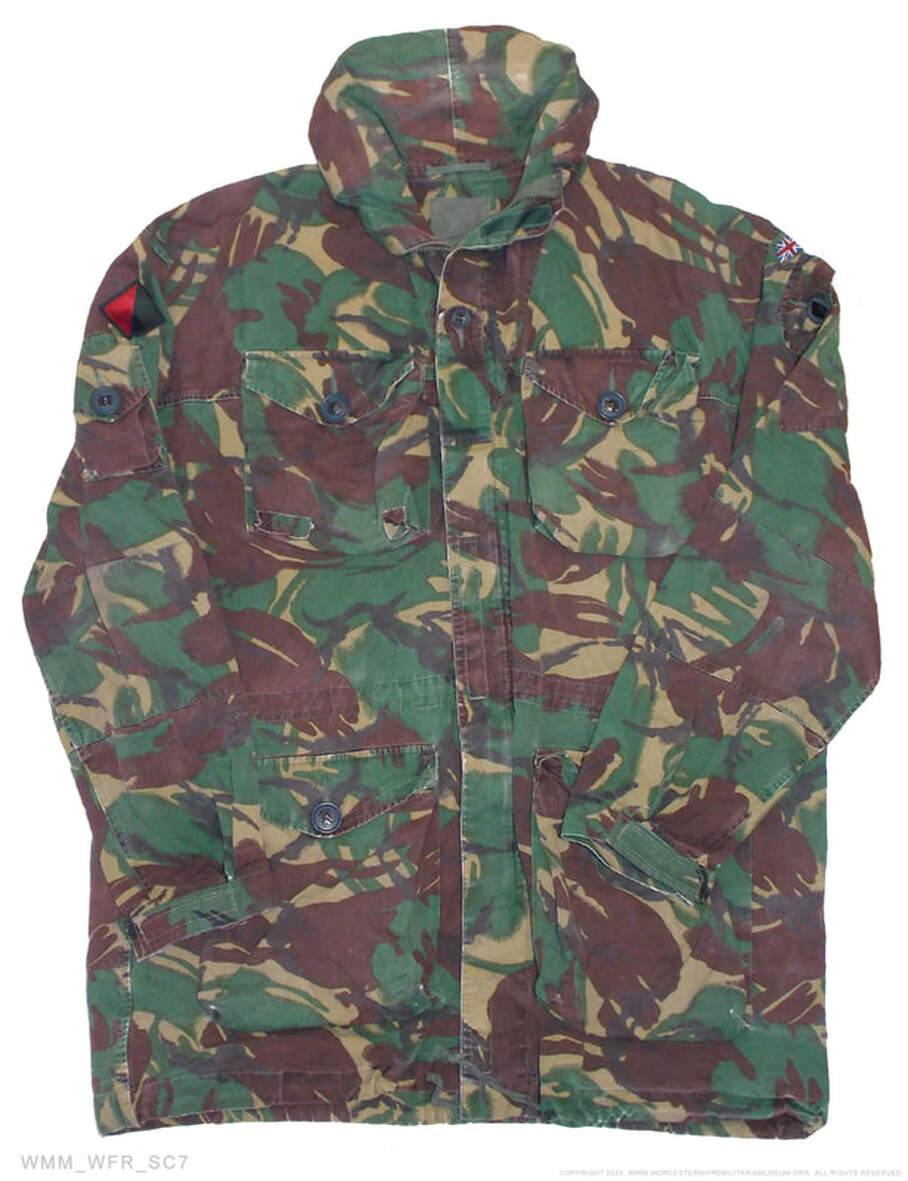 An early example of the WFR beret, dating from the 1970s. The green felt patch appears square and slightly darker in shade to later Lincoln green patches. The beret came from Malvern in Worcestershire and most probably belonged to a Worcestershire veteran.
​ 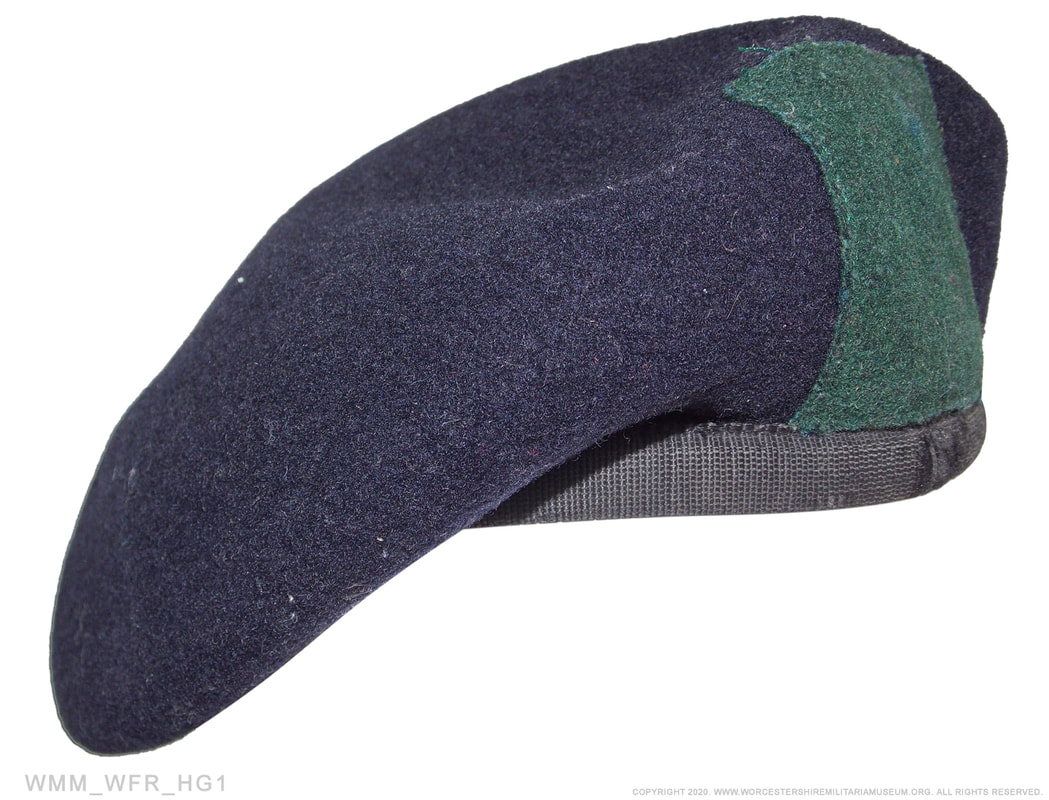 1970s period Worcestershire Sherwood Foresters Regiment beret.
No. 8 dress beret to a WO2

During the 2000s the 1st Battalion of the Worcestershire & Sherwood Forester Regiment was based in Belfast, Northern Ireland, acting as a resident battalion. This beret was worn from 2000 up until 2007 by its owner who served through the amalgamation into the 2nd Mercian Regiment, raising to the rank of Warrant Officer 2nd Class. It is worth noting that after 2007 the blue beret was no longer worn. An embroidered WFR blazer badge came together with the beret, direct from the veteran.

​The beret was worn by all ranks during temperate and warm conditions. The blue beret was replaced by the khaki beret when the regiment officially became the 2nd Battalion, The Mercian Regiment (Worcesters and Foresters), in 2007.
​
Regimental Medical Officer's beret.

A 1970s period example of a Royal Army Medical Corps. (RAMC) officer's beret, as worn by the Regimental Medical Officer (RMO) of the Medical Section. In 1999 the RMO position was held by a RAMC Captain. RAMC Other Ranks serving in the section wore a metal badge on their regimental pattern beret, as opposed to the officer's embroidered version.

In this exhibit, the green of its felt patch has faded over the years but appears to match that of Lt. Colonel Prince, who's beret is part of the IWM's collection, (Catalogue number: UNI 9816).
Mk.6 Composite helmet.

The Mk.6 composite helmet was introduced in the early 1980s to replace the Mk.5 steel "Turtle" helmet, of WWII origin. The Mk.6 was made from ballistic nylon which was finished in green. DPM camouflage helmet covers were worn over the helmet featuring elastic straps for adding foliage.

This particular example has been fitted with a temperate climate or Woodland DPM cover, which exhibits a green felt diamond on the left side, denoting the WFR. Like in previous times it appears that this was not regulation specific and a feature found on all helmets. 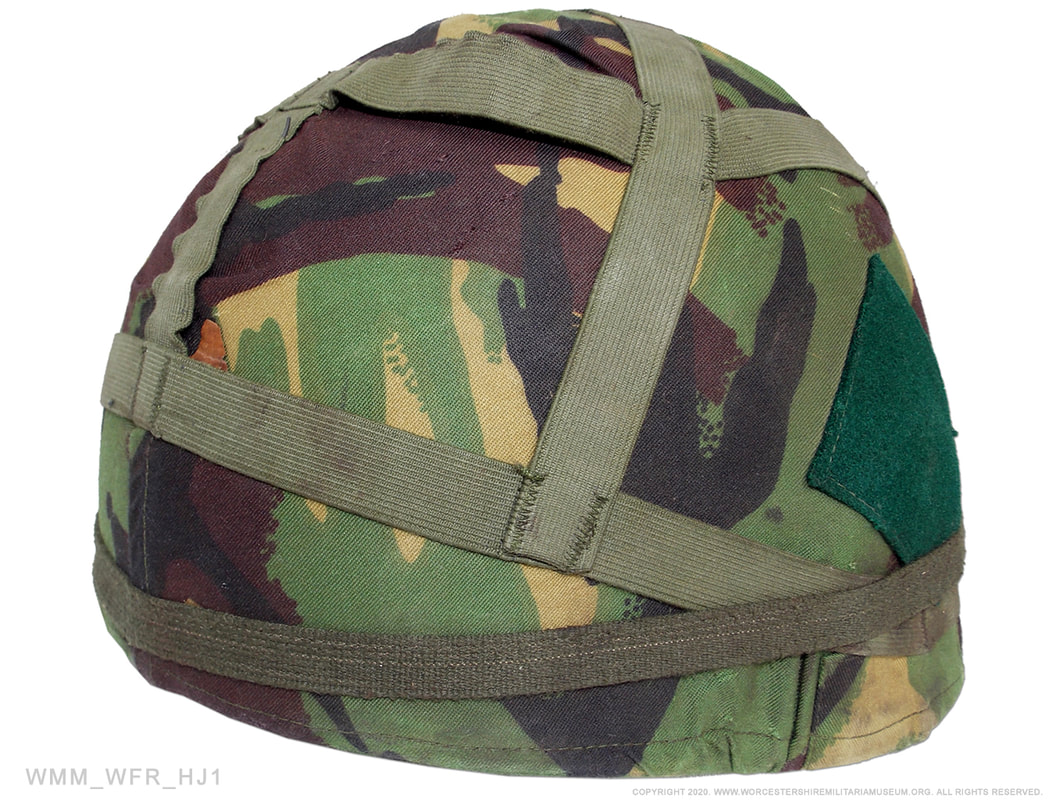 Similar to the above exhibit, this is a temperate climate or Woodland DPM composite helmet cover, which exhibits a green felt diamond on the left side, denoting the WFR. This particular example is named to a Private and also has his serial number written on a webbing strap, with black marker pen. 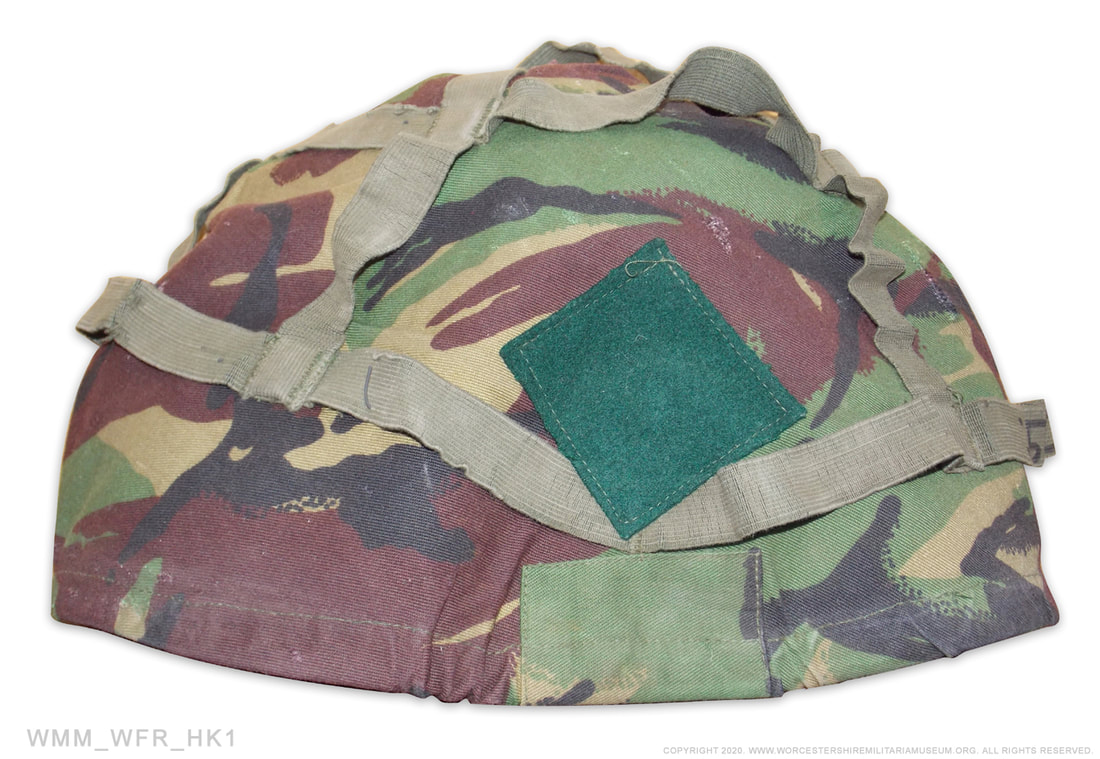 This mess jacket is named to a Sgt. G. Taylor, formerly of the Royal Corps. of Signals and was reused by him during his time in the ACF. After leaving the army it would appear that he volunteered to serve in the WFR Army Cadet Force, eventually reaching the rank of Captain. This style of the jacket matches the W&SF Other ranks version albeit with black facings as opposed to green. 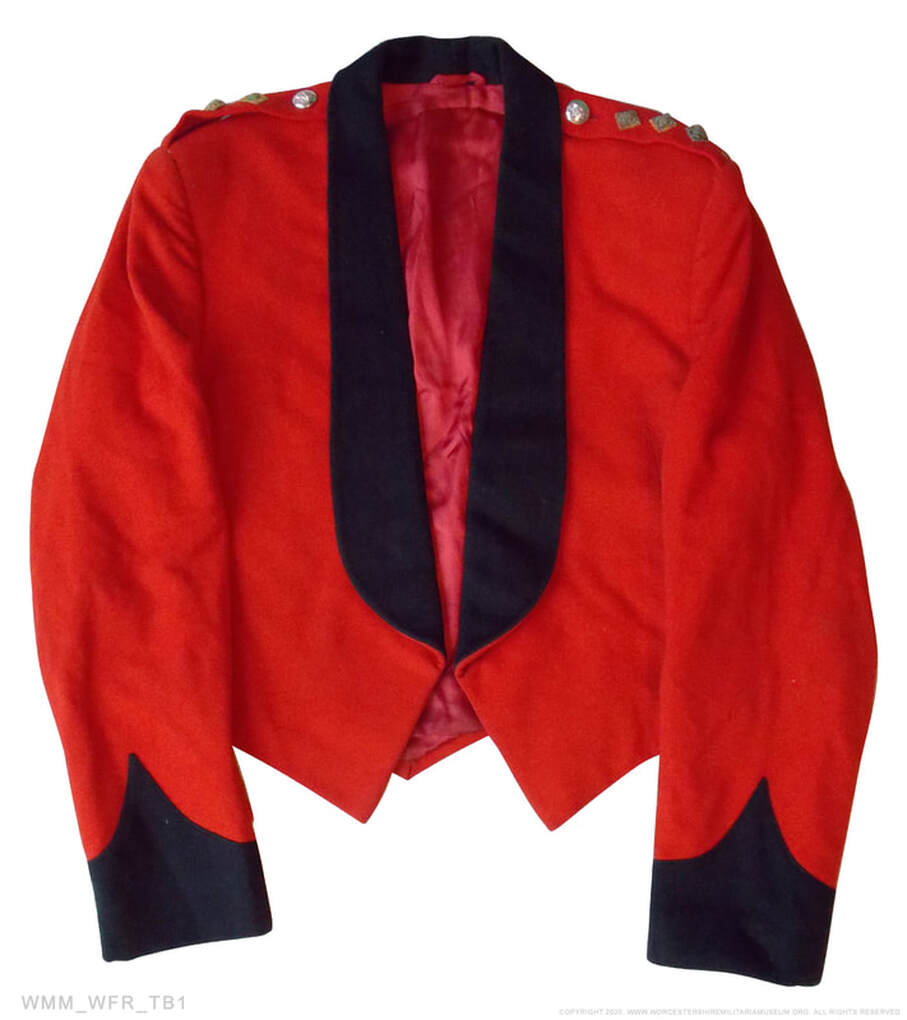 This named brassard was used by an accomplished member of the Derbyshire Army Cadet Force, ranking to a Staff Sergeant. The cadet may have organised physical training activities for the detachment, which would explain the unusual addition of the PTI crossed sabre patch, surmounted to the rank chevrons. As with all cadets his or her achievements and skills are displayed on the brassard, which would have been worn on the upper right arm. It was slipped up the arm and secured in place through the epaulette strap.

Brassards were not only used by cadets but regular soldiers also, including Military Police and Regimental Provosts. The exampled beret above would have been worn together with his brassard. 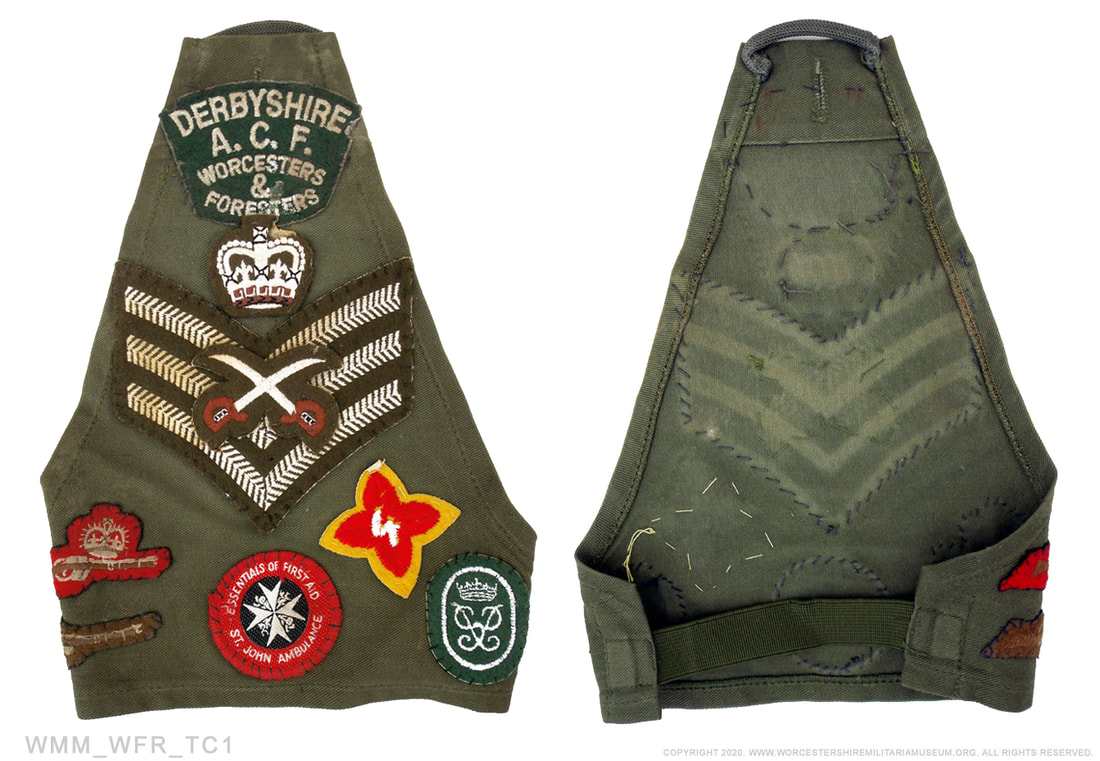 Like the Malvern College CCF, prior to 2007, C Company of the Hereford and Worcester Army Cadet Force wears a rifle green beret, albeit with the crown mounted Rifles cap badge. The Battalion's unique regimental patch design is as interesting as it is attractive, featuring a pale blue ground surmounted by a black cathedral on a green lawn, with the river Severn in the foreground.
Malvern College CCF grouping.

The Combined Cadet Force is different to the Army Cadet Force, as it combines various branches of the military. The Malvern College CCF comprised of Infantry, Royal Marines and Royal Air Force sections. This grouping consists of the cadet's No.8  Dress beret, shoulder brassard and cut-down scrim scarf. The scrim was also used to break up the outline of the head and shoulders.

Similar to the ACF beret this example was used by a pupil of Malvern College's Infantry Section. The Cadet went to Hillstone school before progressing on to Malvern College and House No. 5, whose house colours were red and black. In the Hundred (Year 11) he chose the Infantry branch, attending the annual CCF Longmoor Camp, prior to Malvern College's affiliation with the Mercian Regiment around 2007. CCF took place on a tuesday afternoon where the cadets learnt bushcraft, drill, weapons drill and range firing, as well as patrolling the "9 acre".

Malvern College, on College Road in Great Malvern, played an important role during the Second World War. Not only did House 5 host a contingent of Free French officers but it was also the wartime home of the Telecommunications Research Establishment (TRE), which was responsible for the development of RADAR.
​
The beret features an anodised aluminium badge for The Light Infantry and was worn together with a DPM jacket, webbing belt, and green trousers tucked into the polished black combat boots with olive green elastic straps. The brassard was worn on the right and featured a red Malvern College shoulder title. 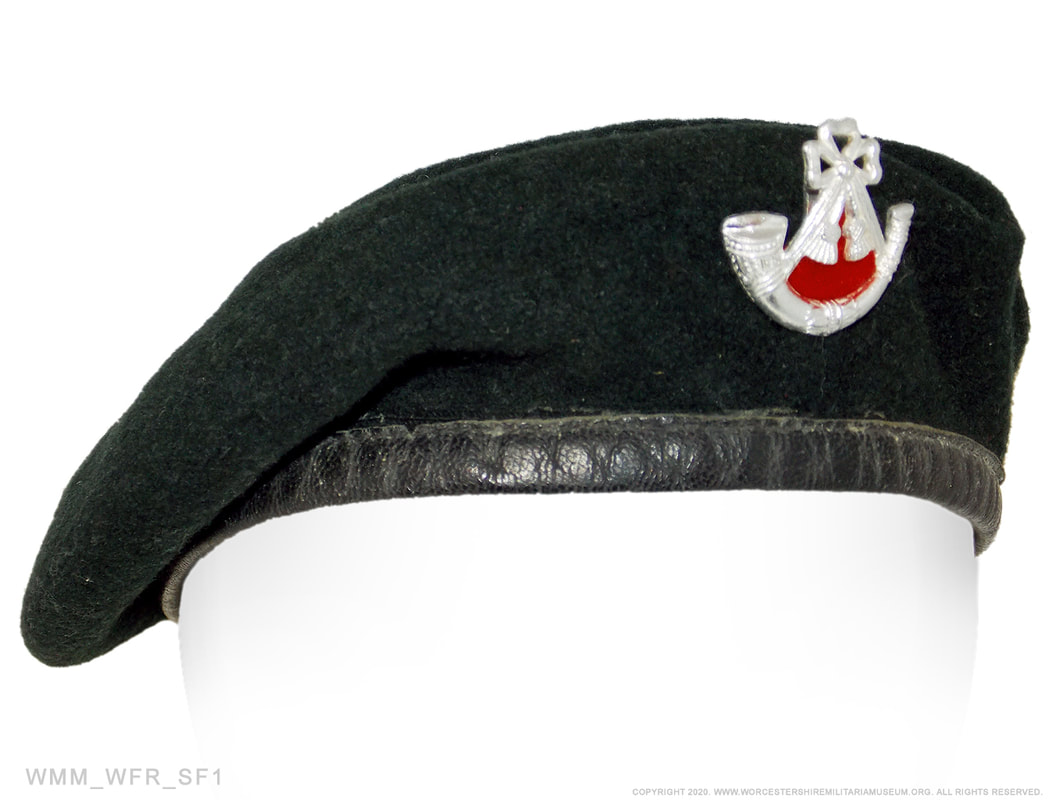