The Worcestershire Regiment green diamond hat and helmet patch, 1900 to the 2009.
The use of distinctive flashes worn on helmets and hats is generally considered a practice associated with the Second World War, however it is an occurrence that dates back to before the First World War and which still continues among certain regiments. Without conducting an in-depth study it is unclear as to when precisely the use of such patches first began, but we do know that a square helmet patch with metal Worcestershire slide was worn on the left side of those helmets used by the Worcestershire Regiment during the Second Boer War, around 1900.

Click here to read the complete article
A look at Worcestershire Regiment green.
Although dress regulations for regiments are usually quite specific in regards to colours used by a certain regiment, in practise colours could vary. This was due to a number of reasons, such as the outfitters or the fact that a flash or patch was theatre applied by the soldier. Below is a chart giving a selection of various shades of green known to have been used by the Worcestershire during World War II and before. The colours have taken from Slouch hats and FS caps.

The Mercian Brigade and the Mercian Regiment badge comparision.
At first glance these two cap badges may appear identical, displaying the double headed Saxon eagle surmounted by a Saxon crown, and it is not surprising really considering that the latter is a re-design of the former. Both cap badges are made from bi-metal and display gilded metal detail over the white metal, however, look closer and you can see some details that set them apart, making identification rather less daunting.

​Read more on the "proposed new" Mercian Regiment badge in this article from The Telegraph, from 2005. 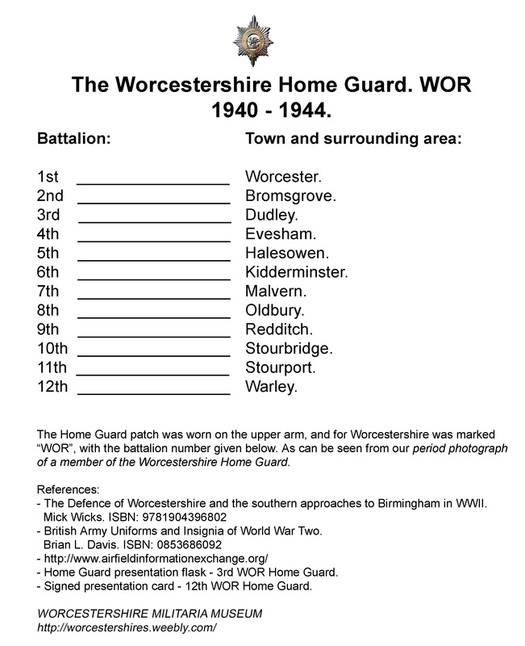 Please consider selling or donating your old regimental pieces to the museum.