The Queen's Own Worcestershire Hussars Exhibition.

Designated the Queen's Own Worcestershire Hussars in 1881, this yeomanry cavalry regiment can be traced back to 1794. The QOWH saw action in both the Boer War and the First World War, however in 1922 the regiment became mechanized and changed to a Royal Artillery regiment.

James Baldwin was born in 1858 into a family of Midland industrialists, known in the local community. His grandfather founded the paper company, Baldwin & Sons Ltd. in 1829 and later became Mayor of Birmingham.

Baldwin grew up at Groveley Hall, in Northfield, then Worcestershire but now part of greater Birmingham. Instead of going straight into the family business like his father, Baldwin first chose to volunteer for his local regiment and in September 1882 was commissioned a Lieutenant in the Imperial Yeomanry Worcestershire - Queen’s Own Worcestershire Hussars. He was further promoted to Captain in 1890, made an Honorary Major in March 1899 and Supernumerary Major in December 1901. An appointment confirmed on the Establishment in April 1902. After 28 years of service to King and Country, Baldwin resigned his commission in August 1910, a year before being awarded the Territorial Decoration in October 1911.

In 1892 he commanded D Squadron, based at King’s Norton, before assuming command of B Squadron in 1896. It would appear that he was part of the Worcestershire Imperial Yeomanry contingent sent to fight in South Africa, during the Second Boer War (1899 - 1902). Most probably with the 16th (Worcestershire) Company, 5th Battalion Imperial Yeomanry in 1900, or with the 102nd.

During the First World War, no doubt following a sense of patriotic duty, he joined the Worcestershire Volunteer Regiment in 1916, a kind of WW1 Home Guard. He was comissioned a Temporary Captain in the role of County Adjutant, before becoming Brigade-Major and regimental Staff Officer. The Volunteers remained on Home Service and in 1918 assumed guard duties on the South Coast.

Aside from his military career he was a County Justice for Worcestershire. At the age of 64 years old Major Baldwin passed away on the 8th of August 1922. He is commemorated on beautiful stained glass window panels in Worcester Cathedral.

This original early exampled cap is named to Baldwin and also bares his initials. It was most probably worn by him during the Boer War and up until 1908, (perhaps even until 1910). After which time the Imperial title was dropped from the regiment’s cap badges being replaced by the Queen’s Own Worcestershire Hussars. The existence of additional cap badge holes would suggest that the cap predates 1902 when an Imperial Yeomanry badge would have been worn before the adoption of the pear blossom metal badge. The Maker’s address dates the cap to 1880 onwards. 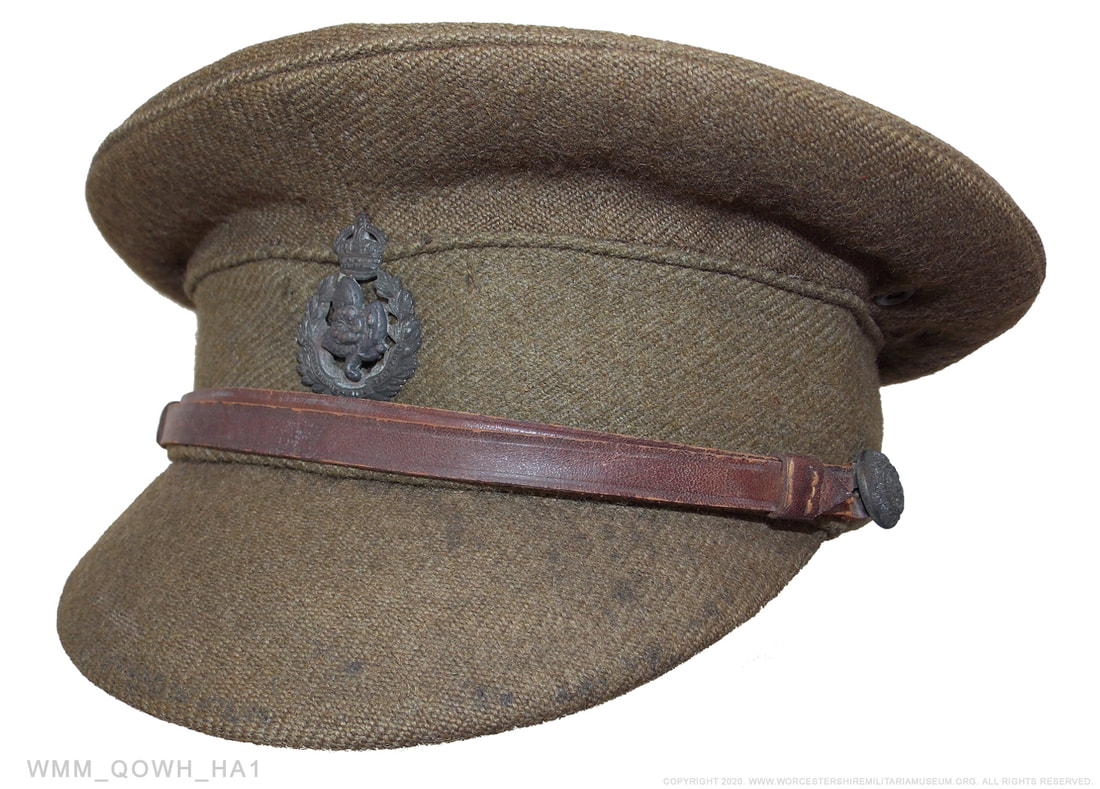 ​A beautiful and scarce example of the distinctive Waterloo red cap used by officers of the Queen's Own Worcestershire Hussars. This shade of red was a characteristic of most Hussar cavalry regiments, with a few exceptions. ​An near identical cap from a Trooper/NCO can be seen on a display at the Worcestershire Soldier Exhibition at Worcester Library, Forgate Street, Worcester, in the United Kingdom. 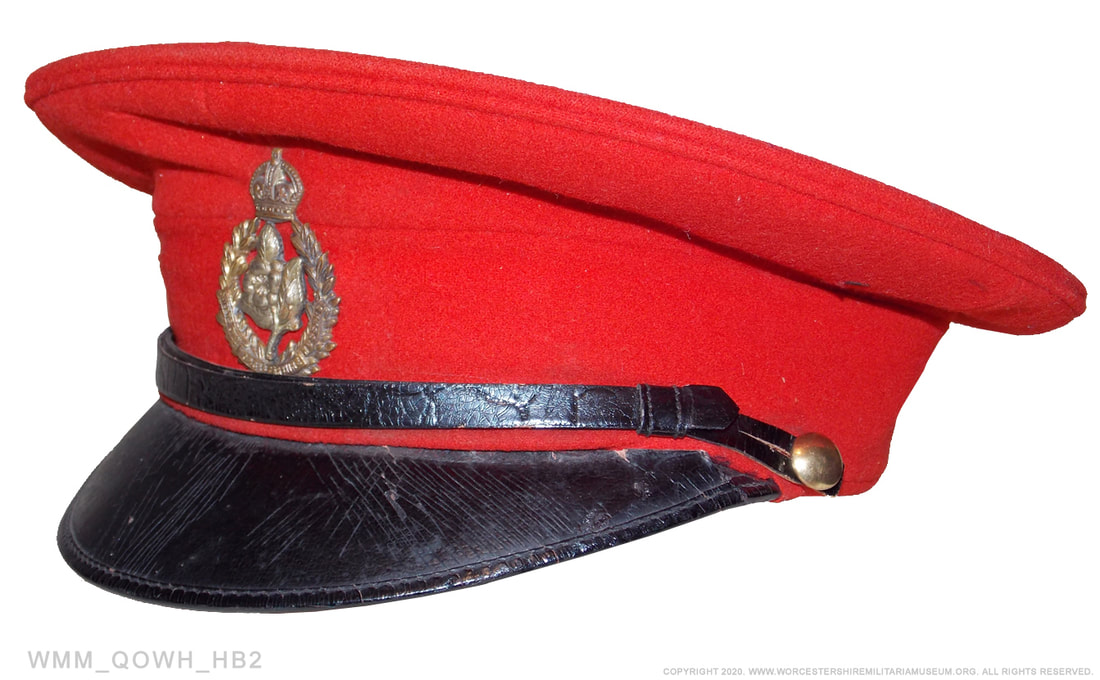 This rare grouping came from the estate of a Royal Armoured Corps. officer who lived in or close to the London Borough of Bexley. During the Second World War he was a Lieutenant in the 3rd R. T. R.  Royal Tank Regiment before transferring to the Queens Own Worcestershire Hussars. The date of his service dress cap indicates that he served with the Hussars from 1953 until its amalgamation and perhaps even afterwards, while the embroidered parachute wings found in his Patrol jacket suggests that he may have transferred to the QOWH either during the Second World War or shortly after. The Worcester Yeomanry was then designated as the 53rd Airlanding Light Regiment (Royal Artillery), part of the 6th Airborne Division. This would certainly explain the lack of medal ribbons on his Tank regiment tunic. Unfortunately the maker labels have all been removed from his garments, making identification perhaps now impossible, although there may be a slight chance to discover his identity from finding an officer who served in both regiments during the early postwar time period.

From their reformation as the QOWH in 1950 until their amalgamation into the Queen’s Own Worcestershire and Warwickshire Hussars in 1956, the regiment was part of the Royal Armoured Corps. and signalled the last time that they would exist under their original name. 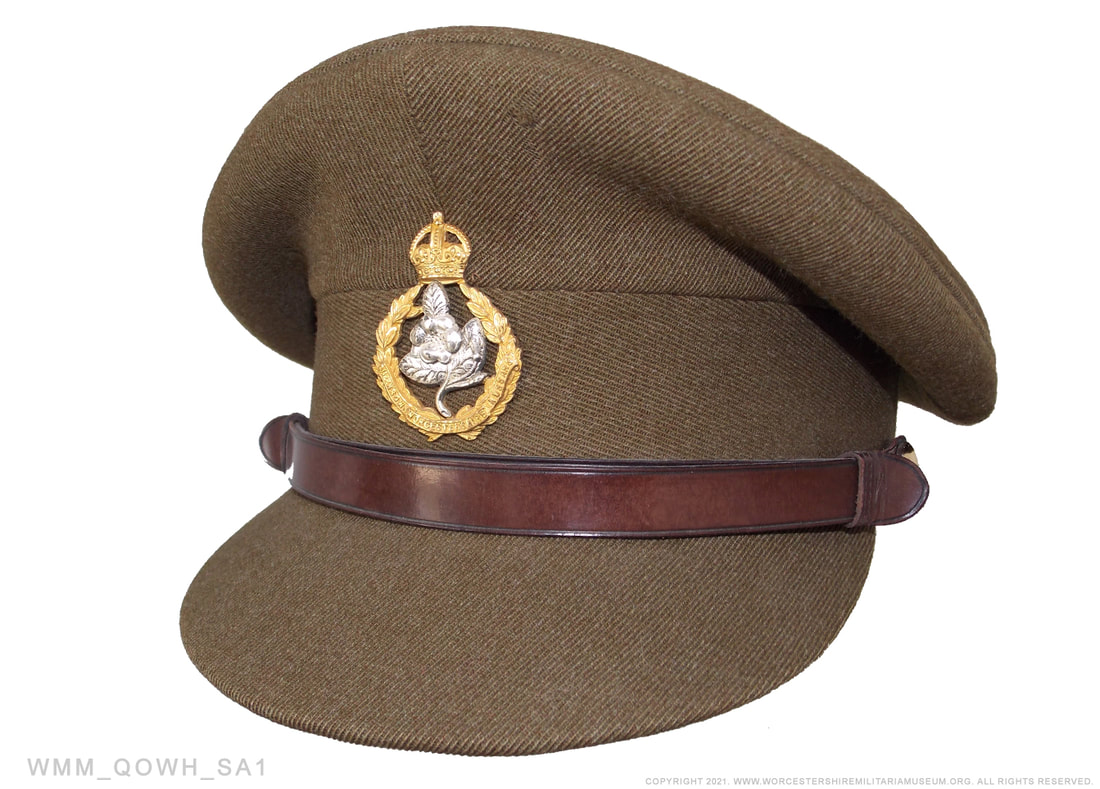 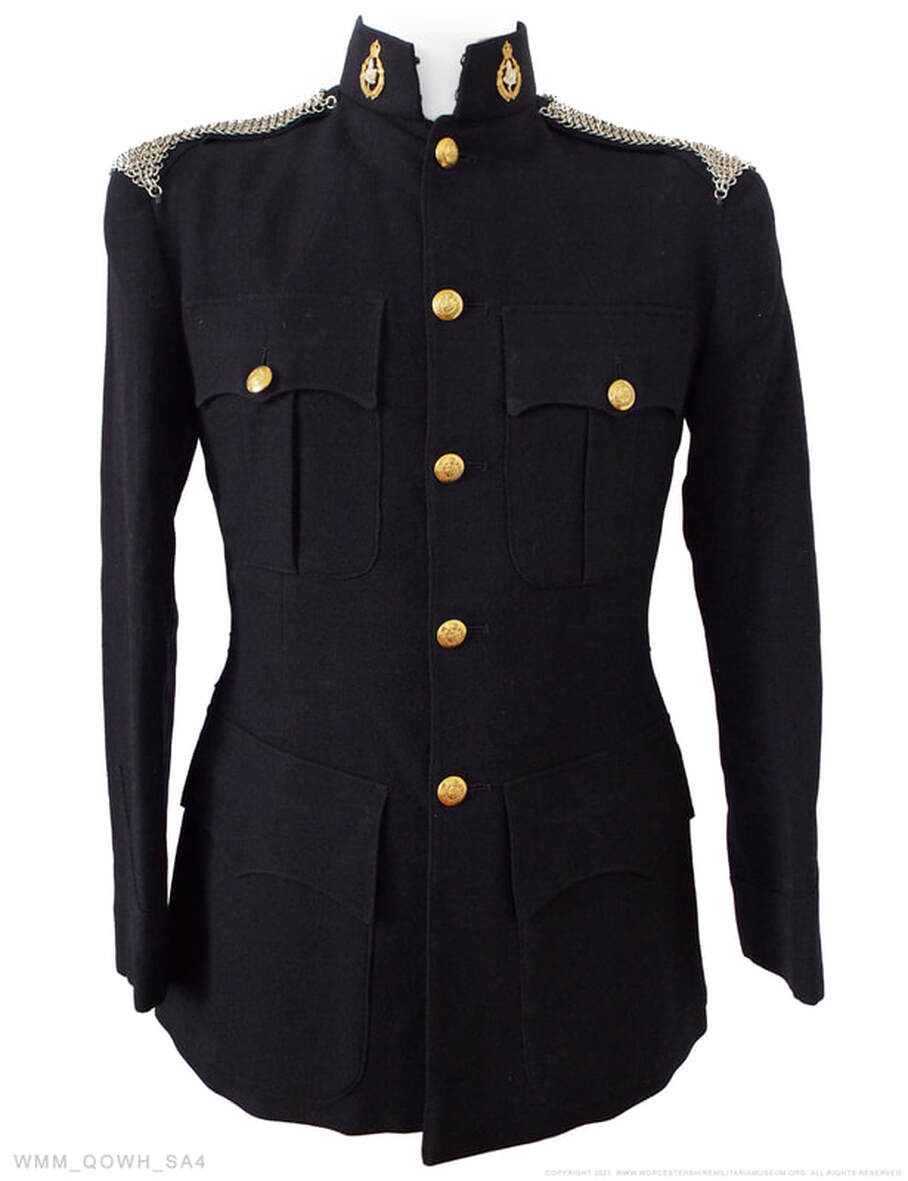 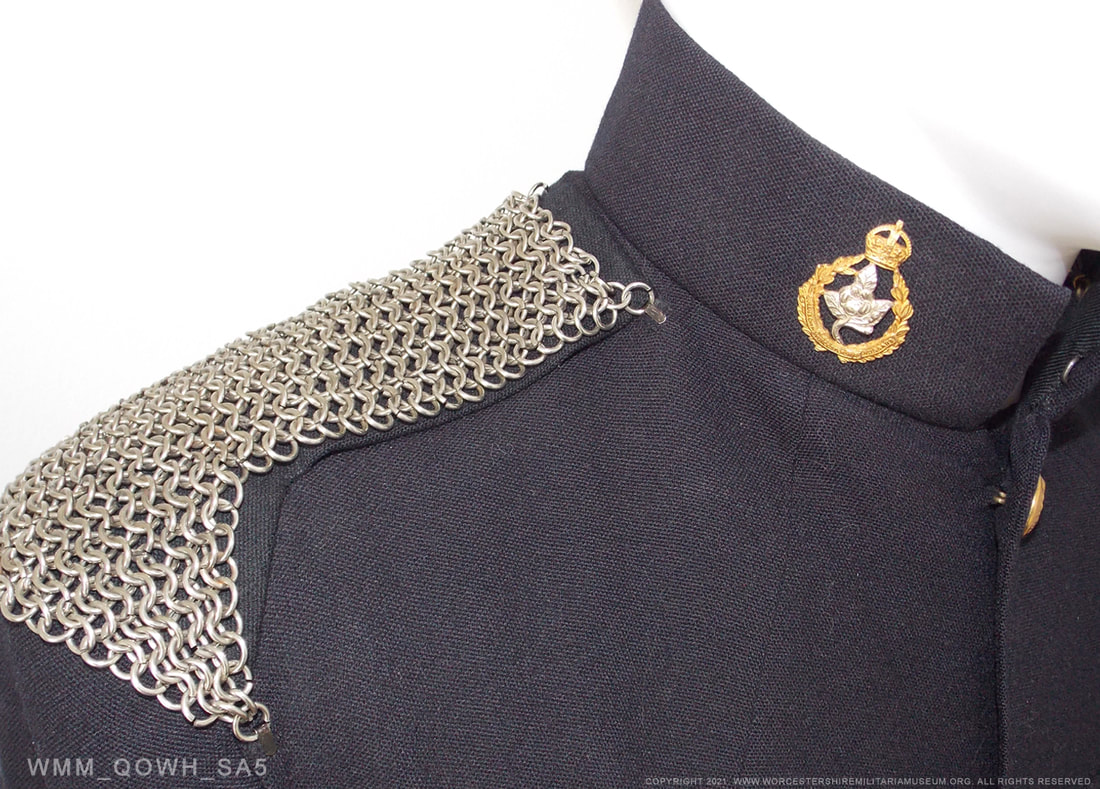 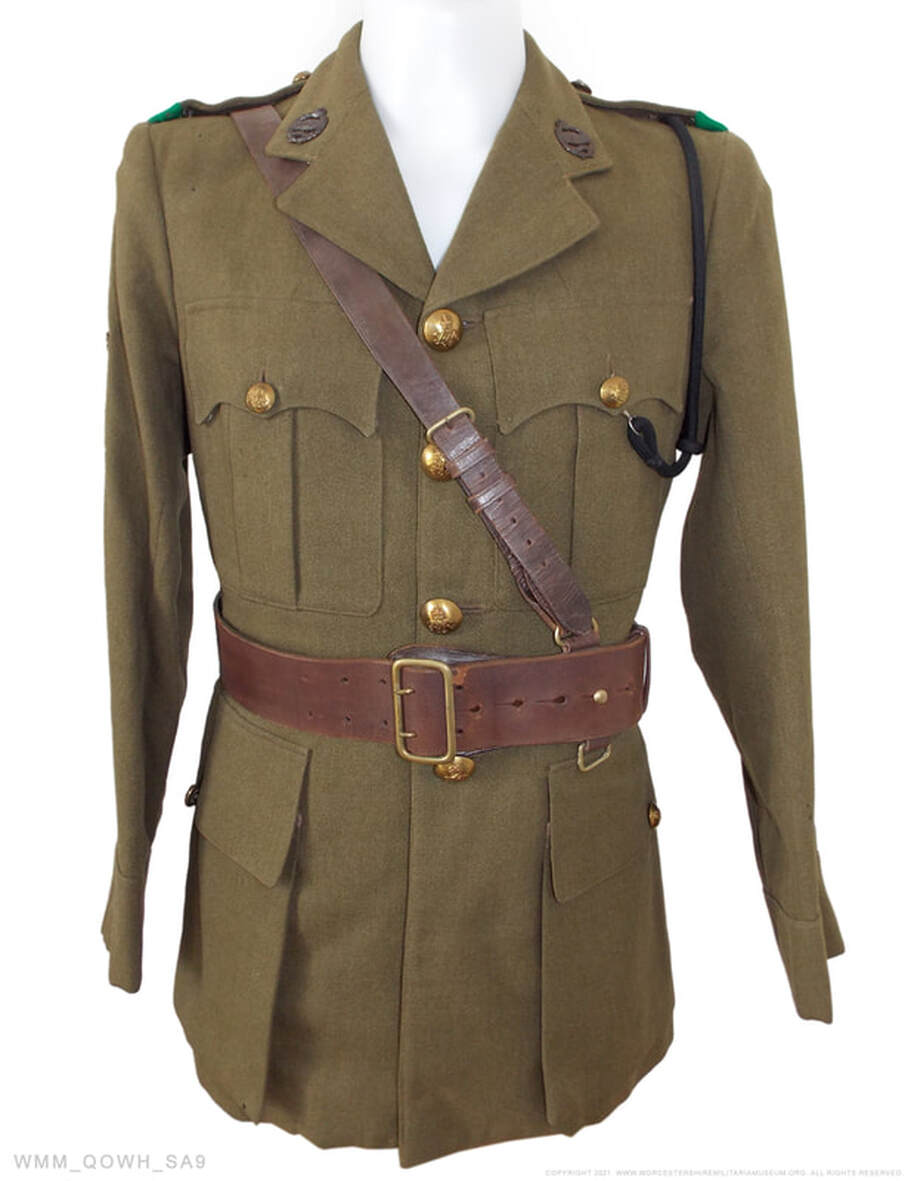 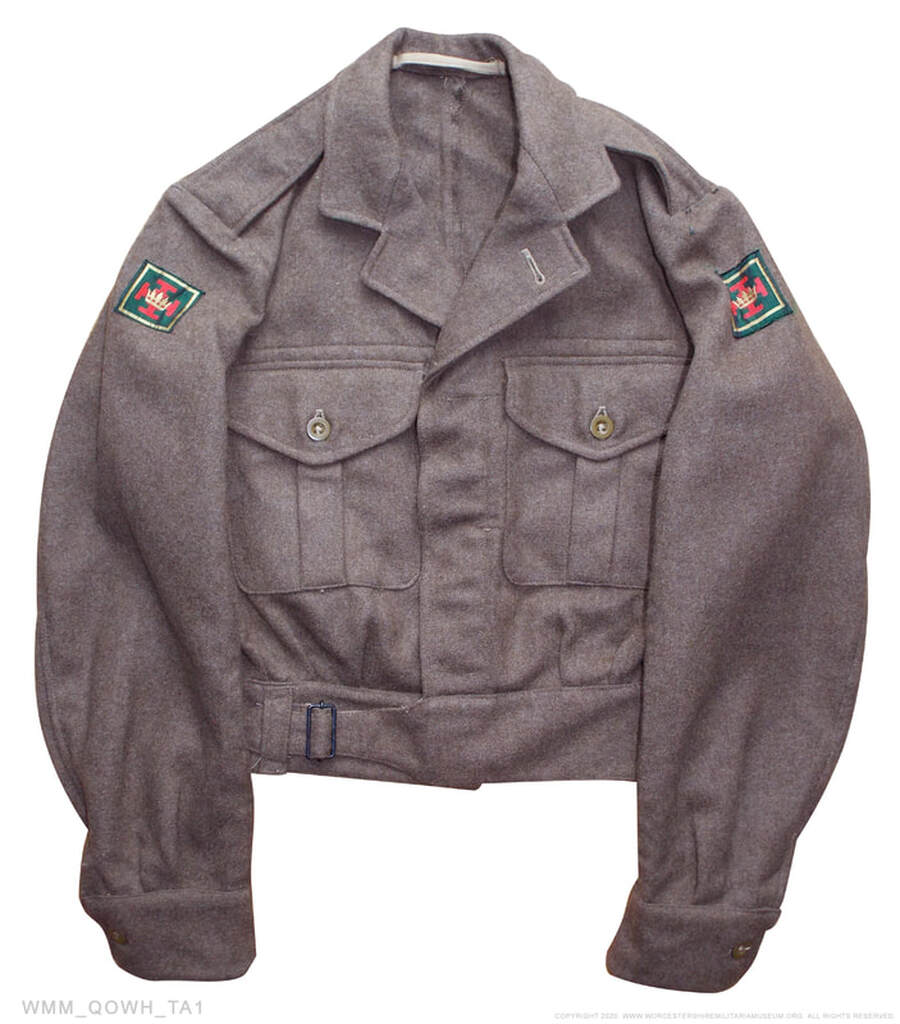 As a Territorial Army regiment of the Royal Armoured Corps. the Queen’s Own Warwickshire & Worcestershire Yeomanry wore a black “tanker’s” beret. This example shows very slight wear, suggesting that it was either unissued or kept as a soldier’s best beret. The anodised aluminium cap badge displays elements from both former regiments. The standing chained bear represents Warwickshire while the pear blossom wreath represents Worcestershire.
No.8 Dress Beret of The Queens Own Mercian Yeomanry
​
Since 1956 the QOWH has been amalgamated several times, whilst continuing as a Territorial Army unit. The Queens Own Warwickshire & Worcestershire Yeomanry became the Queens Own Mercian Yeomanry in 1971, which then became The Royal Mercian and Lancastrian Yeomanry in 1992. In 2014 the RMLY ceased to exist, although the impressive history of these regiments has been taken over by 54 Queen's Own Warwickshire and Worcestershire Yeomanry support Squadron of the 37th Signal Regiment.