In 2007 the the Worcestershire and Sherwood Foresters Regiment became the 2nd Battalion Mercian Regiment. A Light Infantry Battalion serving Worcestershire, Derbyshire and Nottinghamshire, in the Midlands of England. Battle honours include five tours in Afghanistan, on Operation Herrick.

Whilst primarily focused on 2 Mercian, this gallery also includes artefacts from the other Battalions of the Mercian Regiment, who should not go unmentioned.
Field Officer’s headdress grouping.

This grouping belonged to an officer who served with the Cheshire Regiment prior to the amalgamation in 2007. He was commissioned as a Second Lieutenant in 2004, from The Military Academy Sandhurst and a decade later reached the rank of Major. During his the career he served on operational tour in Iraq and Afghanistan, as well as a posting to the regiment's Army Recruitment Team. 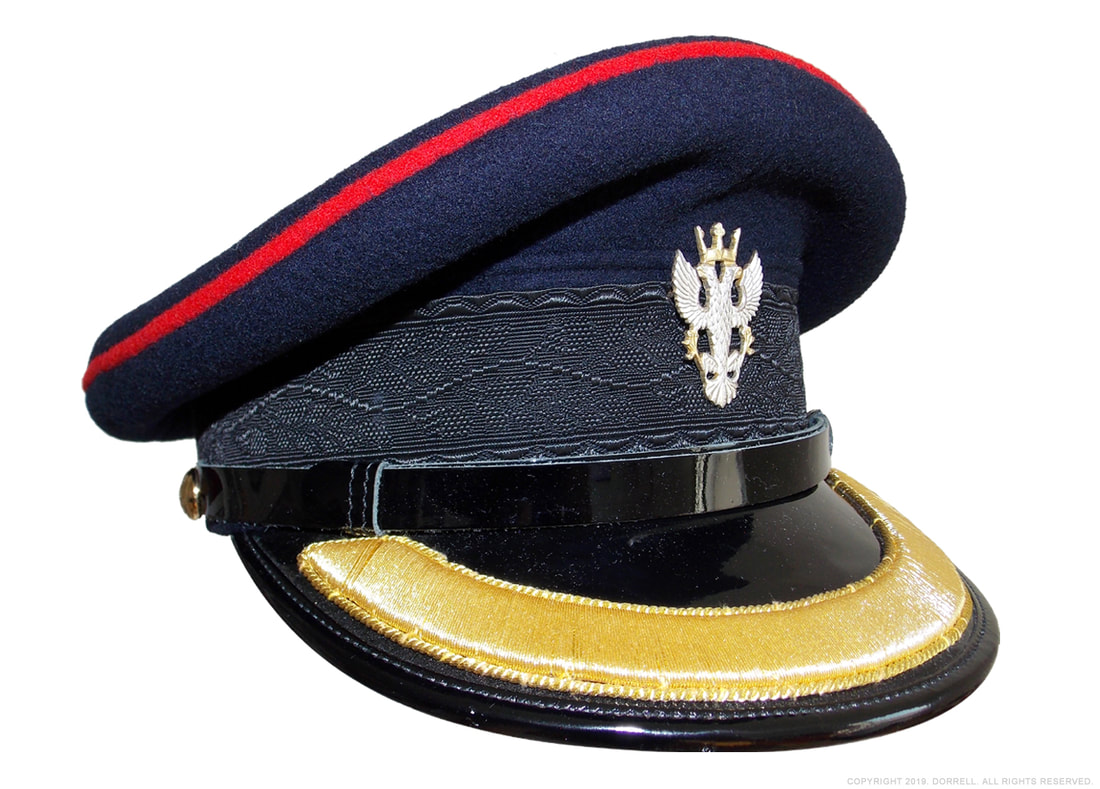 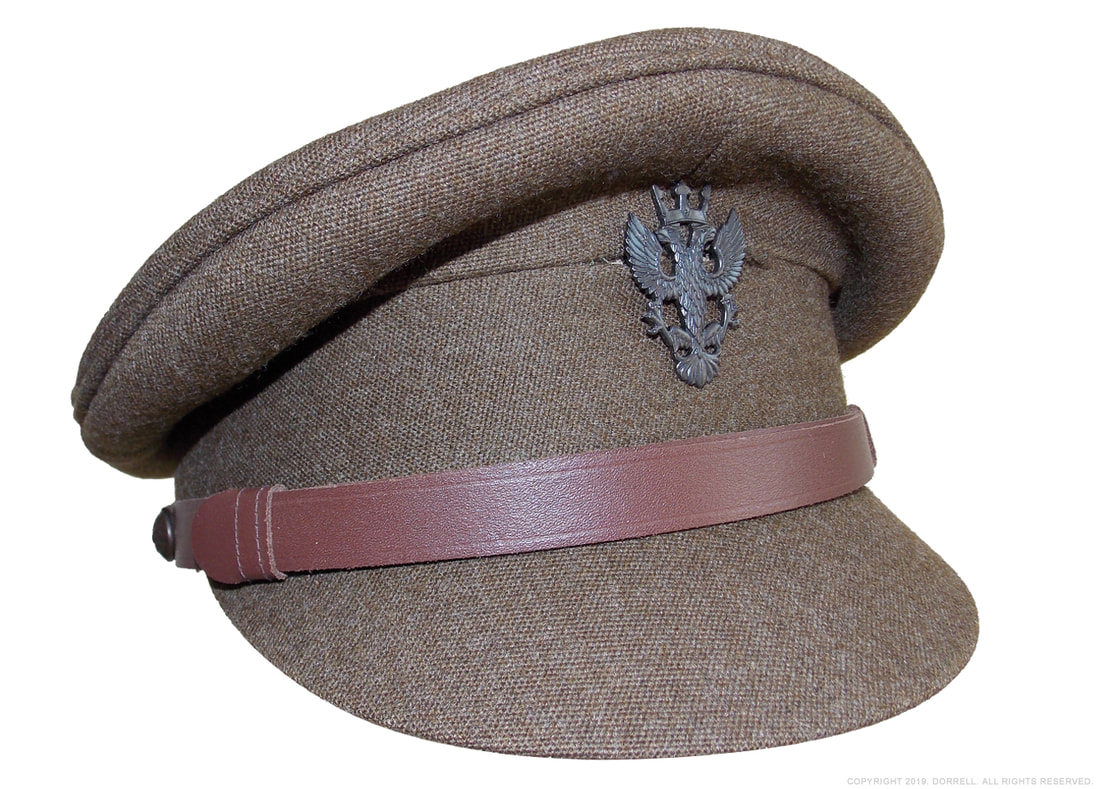 This superbly tailored and immaculate conditioned Service Dress uniform belonged to a WFR and 2 Mercian  Officer who served in the ACF before being commissioned. He was deployed to Bosnia and Iraq, rising to the rank of Captain. 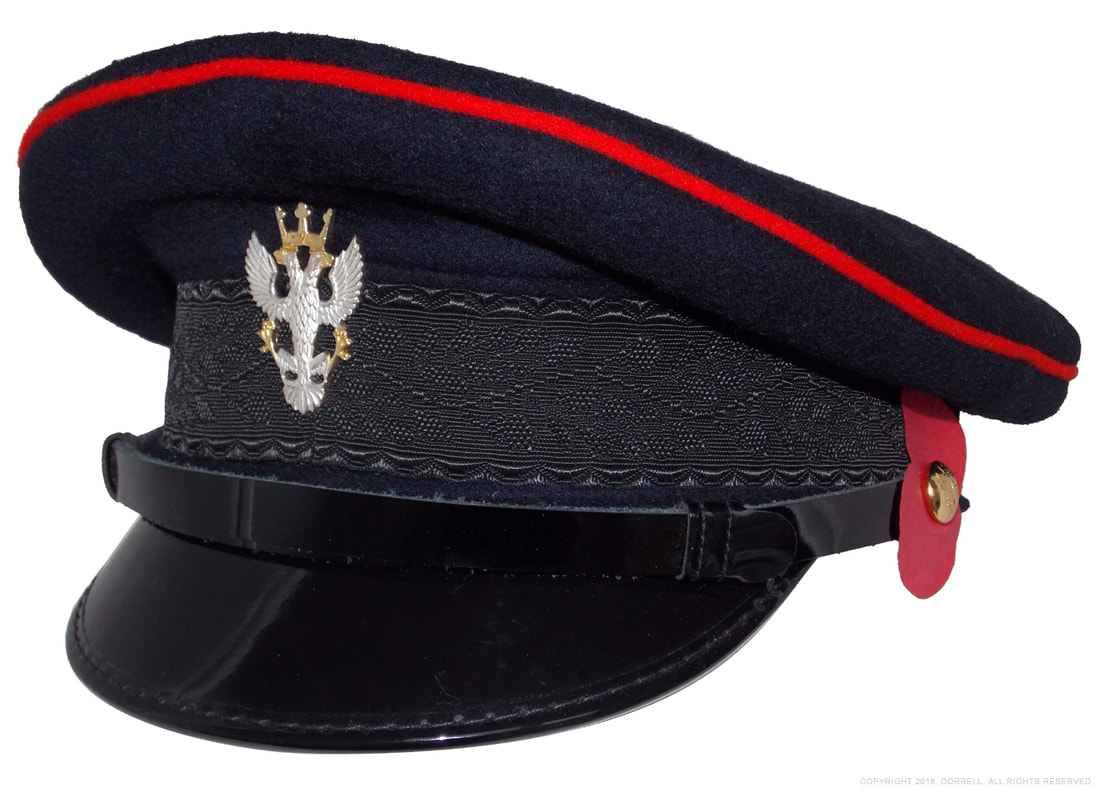 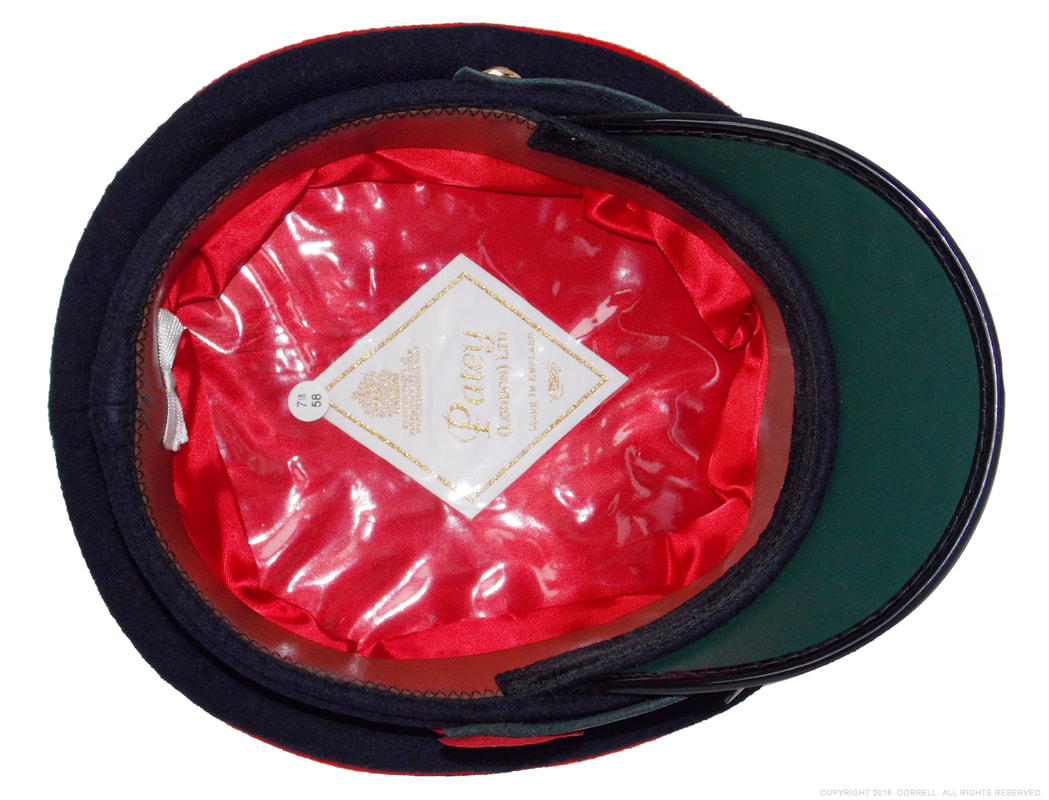 Mercian Regiment Officer's Dress hat.
The No.1 Dress cap is used by Warrant Officer 1st Class and all Officer ranks up to and including the rank of Captain. Ranks of Major and Lieutenant Colonel wear the Field Officer's peak with gold braid, as can be noted in the WFR gallery. ​The Forage cap is worn with the No.1 Dress Uniform, as well as the No.2 and No.3 Orders of Dress. The size of the silver and gilt cap badge is notably smaller than that worn by ORs. 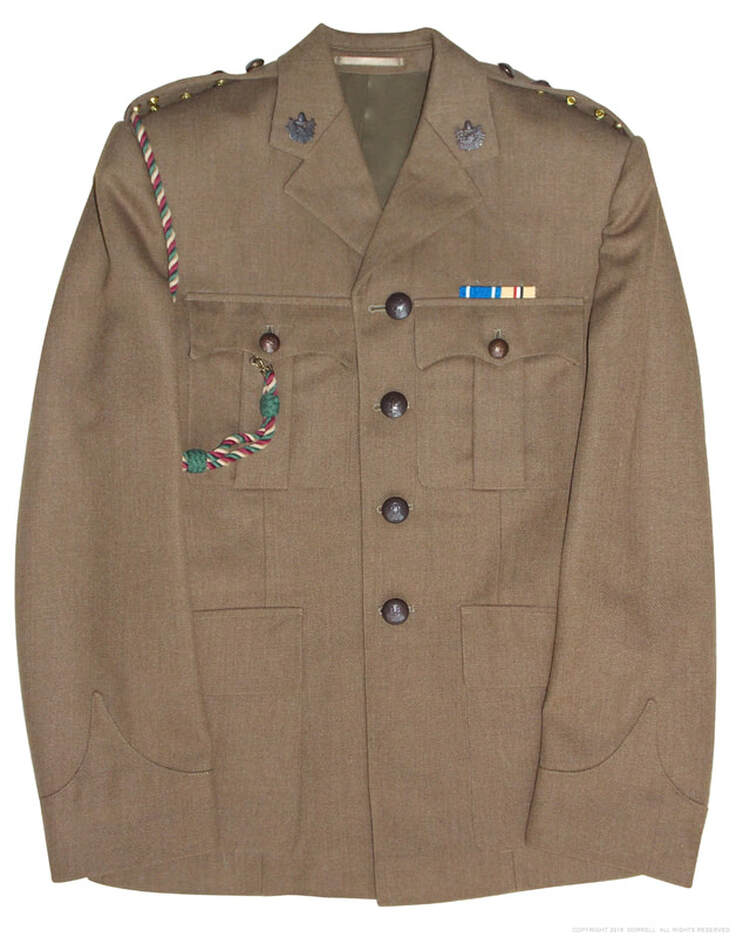 2nd Mercian Regiment Captain's Service Dress tunic.
Unlike other regiment the Mercian officers are unique in wearing their lanyards on the right shoulder instead of the left due to regimental tradition.
Officer's Headdress grouping.
Officer's dress peaked cap and beret belonging to the same officer, showing slight useage. The beret is particularly interesting as it is a high quality private purchase example, which has been fitted with an ​Officer's regulation bronze cap badge. The Dress cap was worn by the Officer until his promotion to Major. 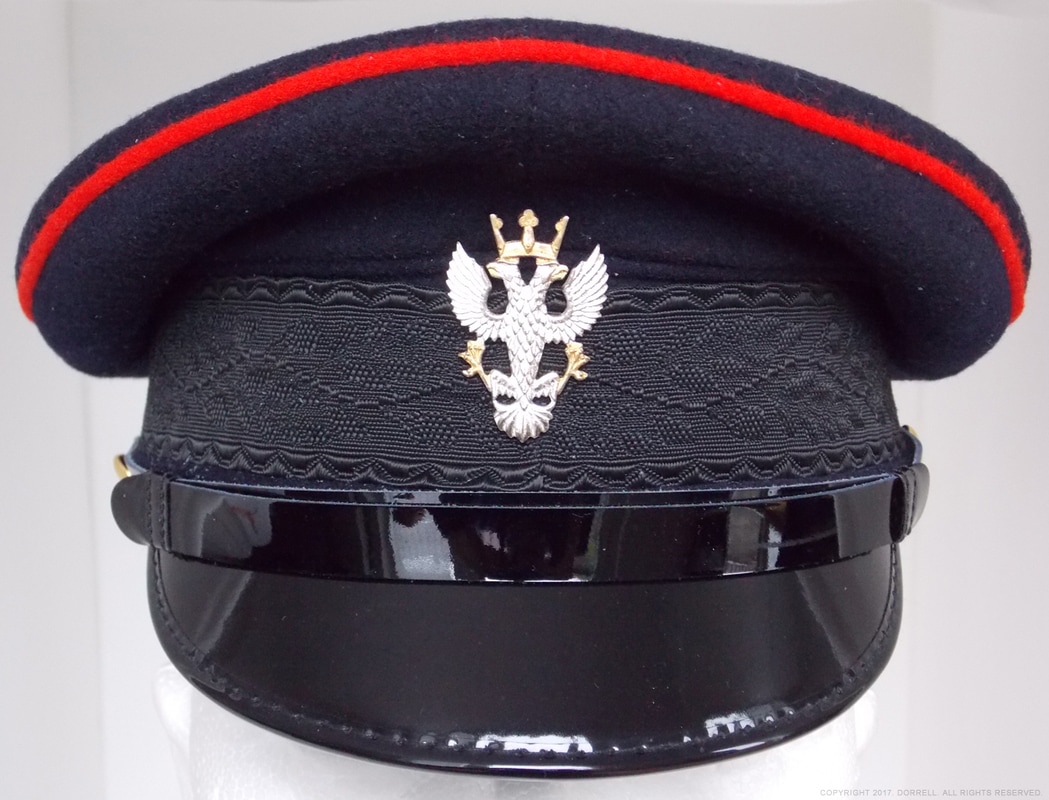 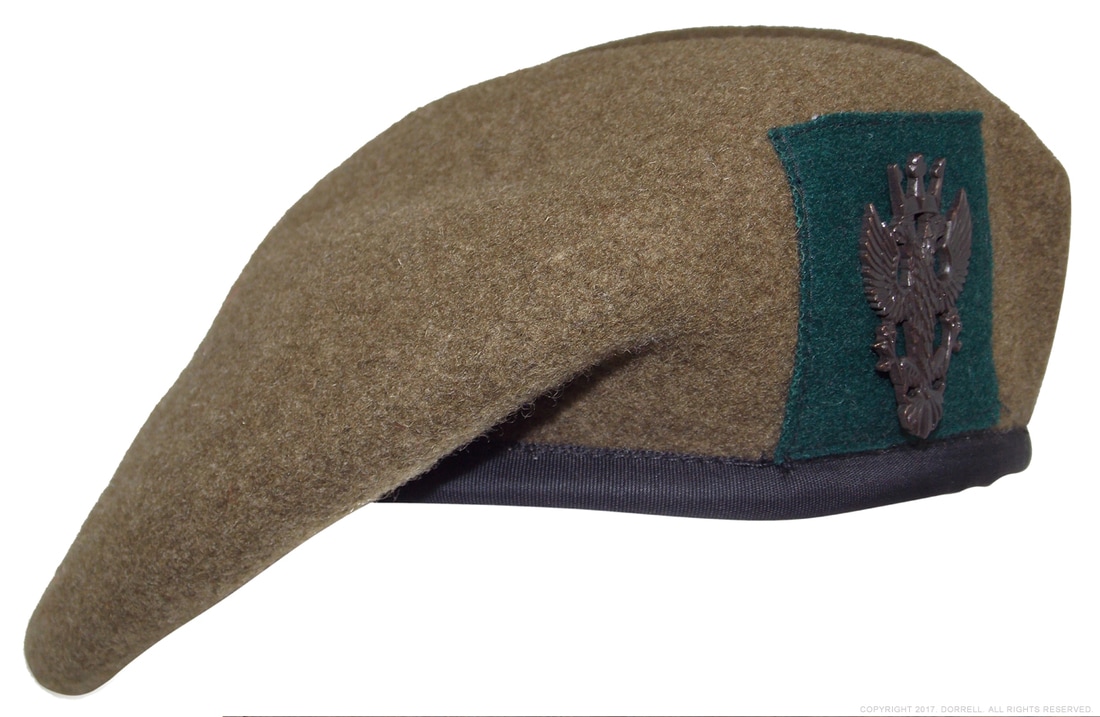 This uniform set belonged to an officer who graduated from Sandhurst and eventually reached the rank of Major. He saw active service in Iraq as well as Afghanistan, and for a period was Adjutant of the Regimental Headquarters Battalion. This collection consists of his No.1 Dress uniform, named, his No.4 Dress uniform and his Officer’s Regimental Pattern side hat (Coloured Field Service hat).

The tropical No.4 Dress was worn on on posting to Cyprus and is more unusual than the No.2 Dress uniform. The Mercian Regiment side hat can be worn by officers for the No.13 Dress Barrack Dress Jumper Order Non Parade – Officer and the No.14 Dress Barrack Dress Shirt Sleeve Order Non Parade – Officer. The coloured side hat is a private purchase article which, according to 2009 Dress Regulations, was tailored by AMMO and Co. Mercian side hats, as well as the WFR version, appear to be less common than their Worcestershire Regiment predecessors, which may be explained by the fact that they are reserved for Officers and Warrant Officers 1st Class only.

This rare Bush hat was by worn a member of the 2nd Battalion, as can be observed by the Lincoln Green felt diamond side patch. Whilst similar to the WFR example below, it is in Multi-Terrain Pattern and features a wider brim and removable neck flap. MTP was used by the British Army from 2010 onward. The 2nd Battalion, The Mercian Regiment Twitter feed shows such hats being worn by the Battalion on the 2018 Exercise Thunderstorm 18 in Lithuania, before it became a standard Battalion feature on their 2019 Cyprus deployment.
Hat Combat Tropical.

Nearly identical to the example above, this 2 Mercian Bush hat is slightly greener in appearance, with the placement of the Battalion diamond lower and attached more professionally. Interestingly, the patch dimensions on this hat, the previous example and the MK7 helmet are identical. The metal airvents are also positioned more aft of the hat's body, suggesting a different supplier. 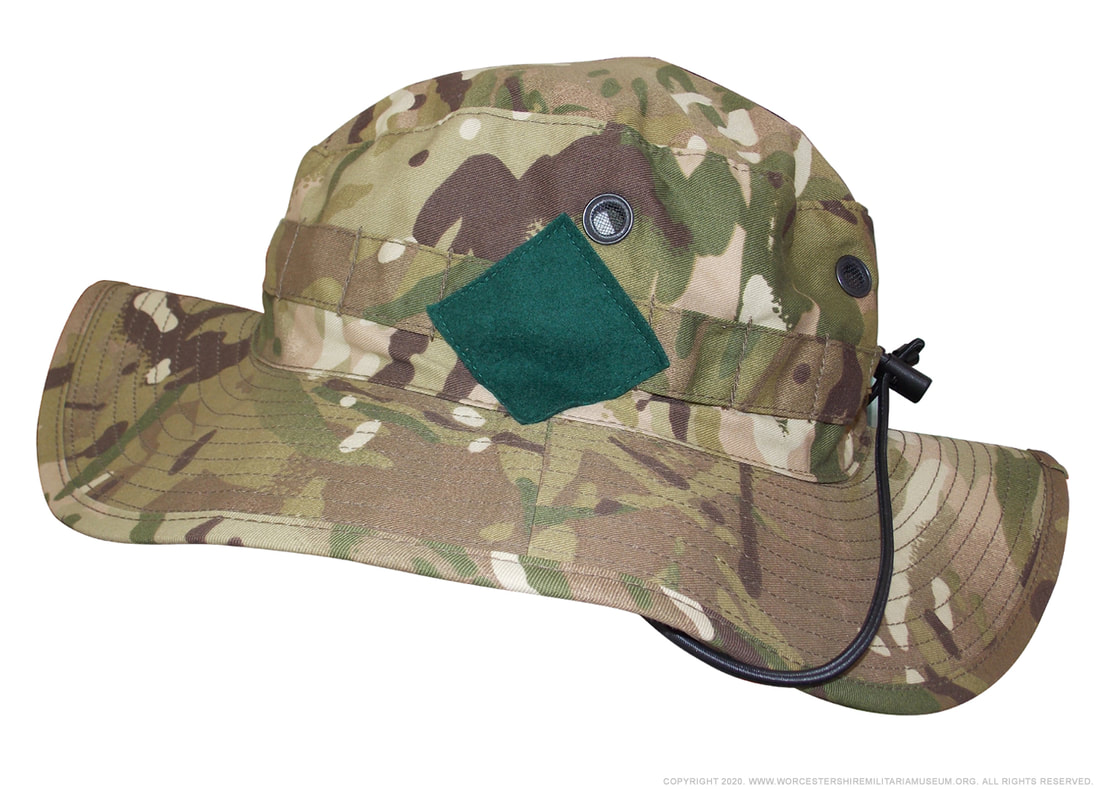 This uniform grouping belonged to a Corporal who served with both the Worcestershire & Sherwood Forester Regiment and 2 Mercian. This NCO has had a long career, as can be seen from his medal ribbons, serving on two tours in Bosnia on IFOR, as well as in Northern Ireland and on tour in Afghanistan.

A scare example of a British Army Boonie hat in DPM desert camo. The hat has been field modified, professionally, to give it that "Squaddie" look, while its owner has added a WFR diamond patch to the side, surmounted by a blackened WFR badge. 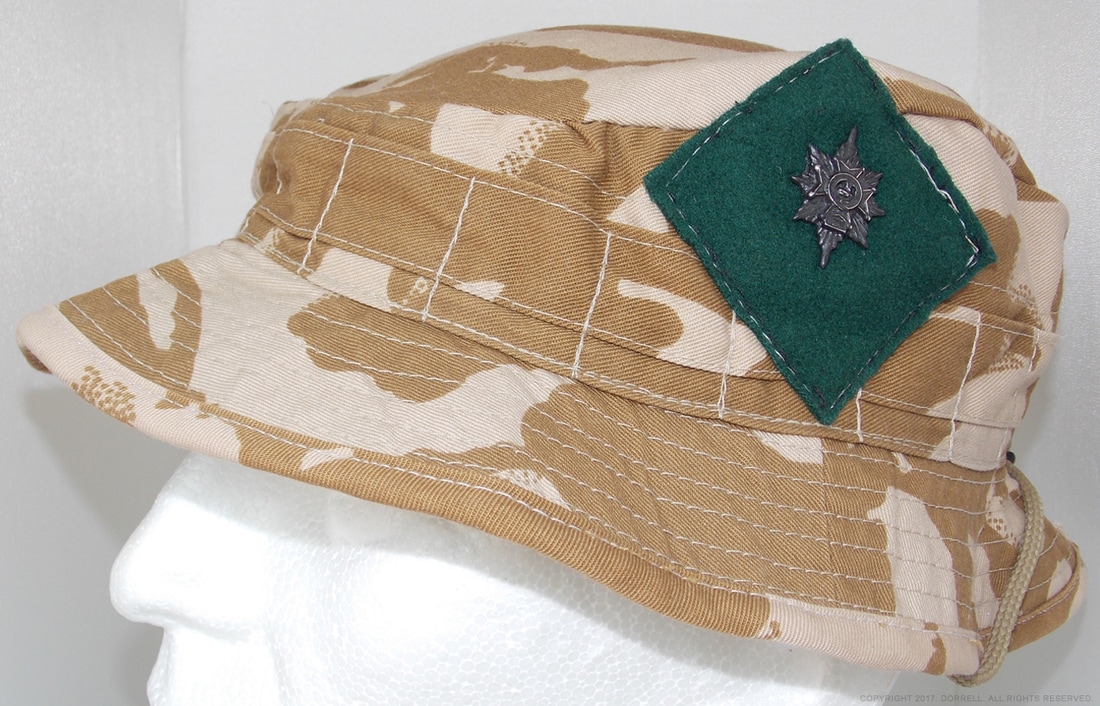 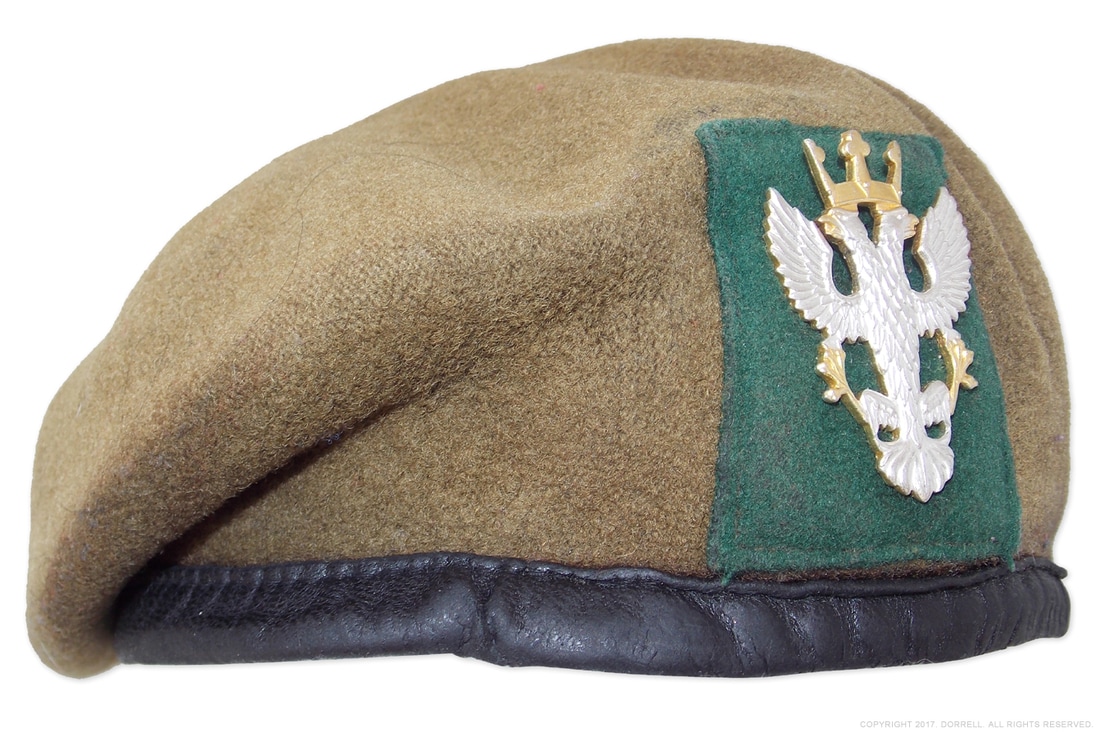 2 Mercian (Worcesters & Foresters) khaki Dress beret.
The No.1 Dress cap cap used by Warrant Officer 2nd Class and all lower ranks. The cap is worn on formal occasions as well as with the No.2 Service Dress, No 13 Barrack Dress and No.14 Shirt Sleeve Order. 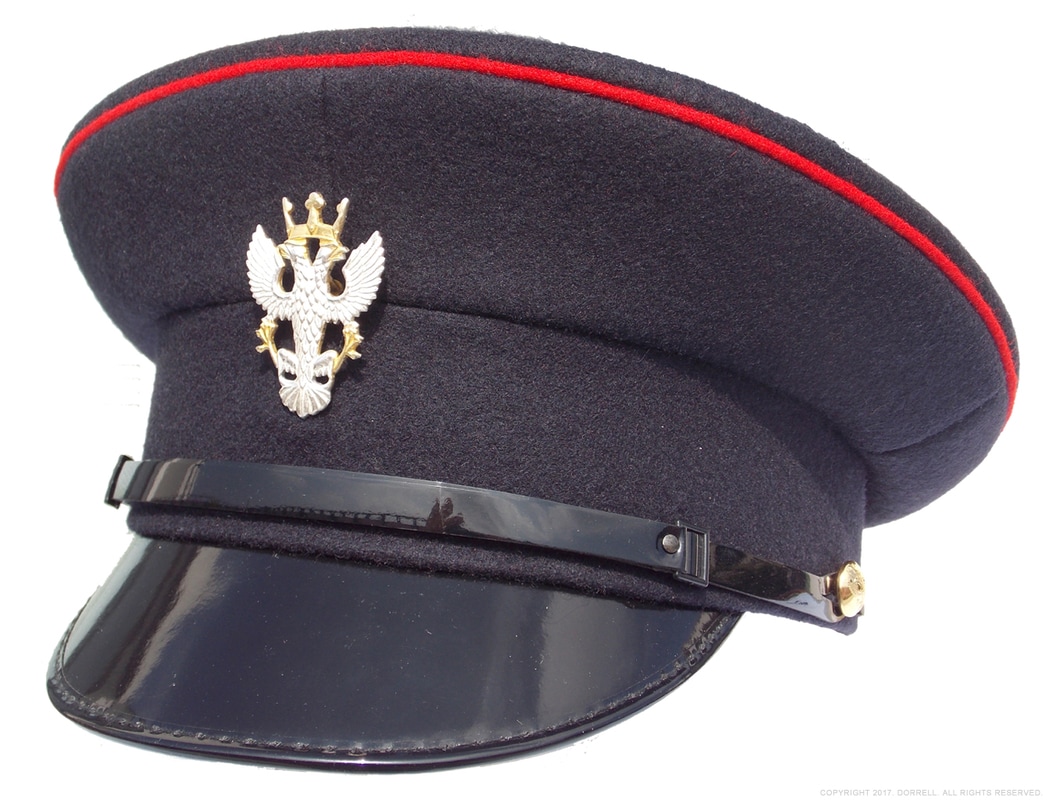 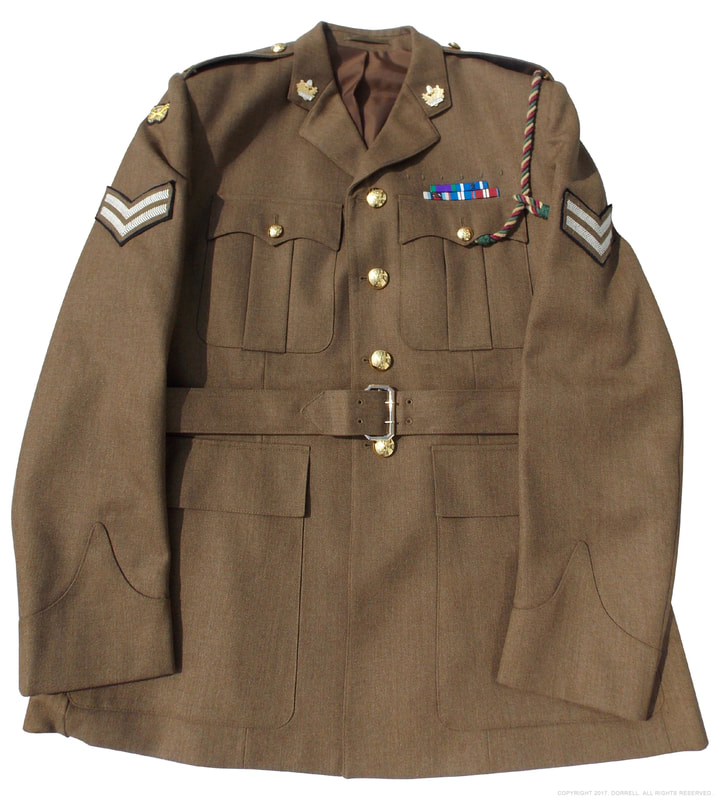 This cap is typical of the Service Dress peaked caps used by all officers of the Mercian Regiment. Its bevelled top and short peak is a characteristic of nearly all modern British army caps and a feature that became fashionable from the 1960s onwards, as can be seen in the WFR gallery. 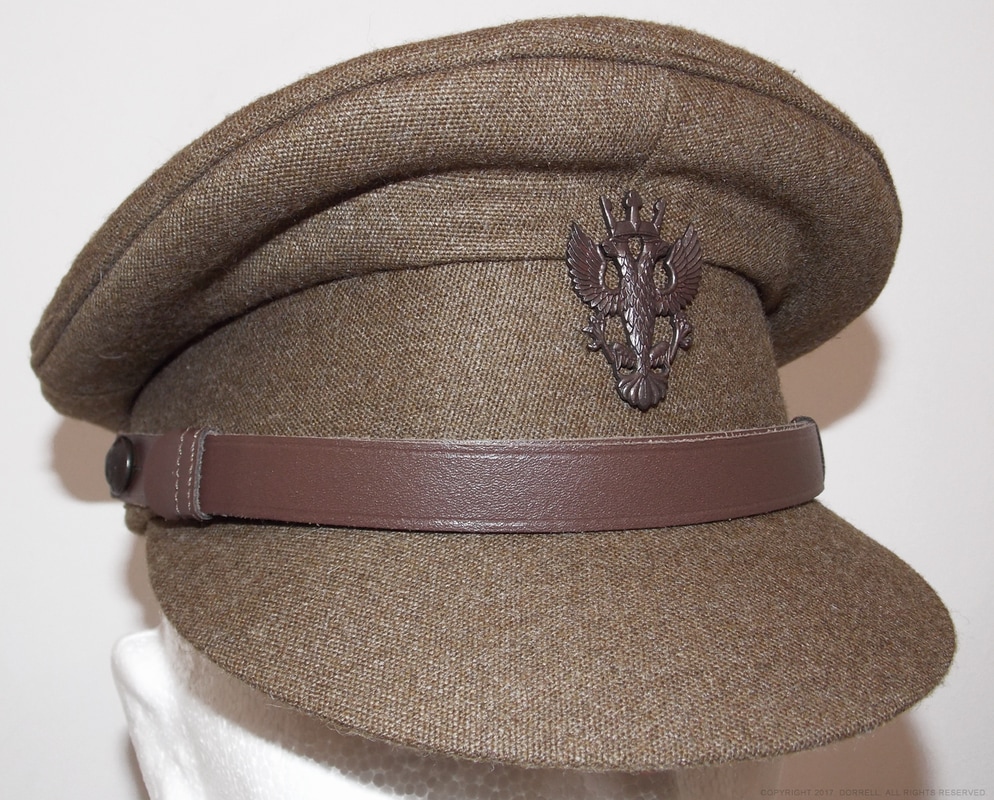 This example belonged to a Second lieutenant.

This particular beret was acquired from Malvern in Worcestershire and no doubt belonged to a local veteran. 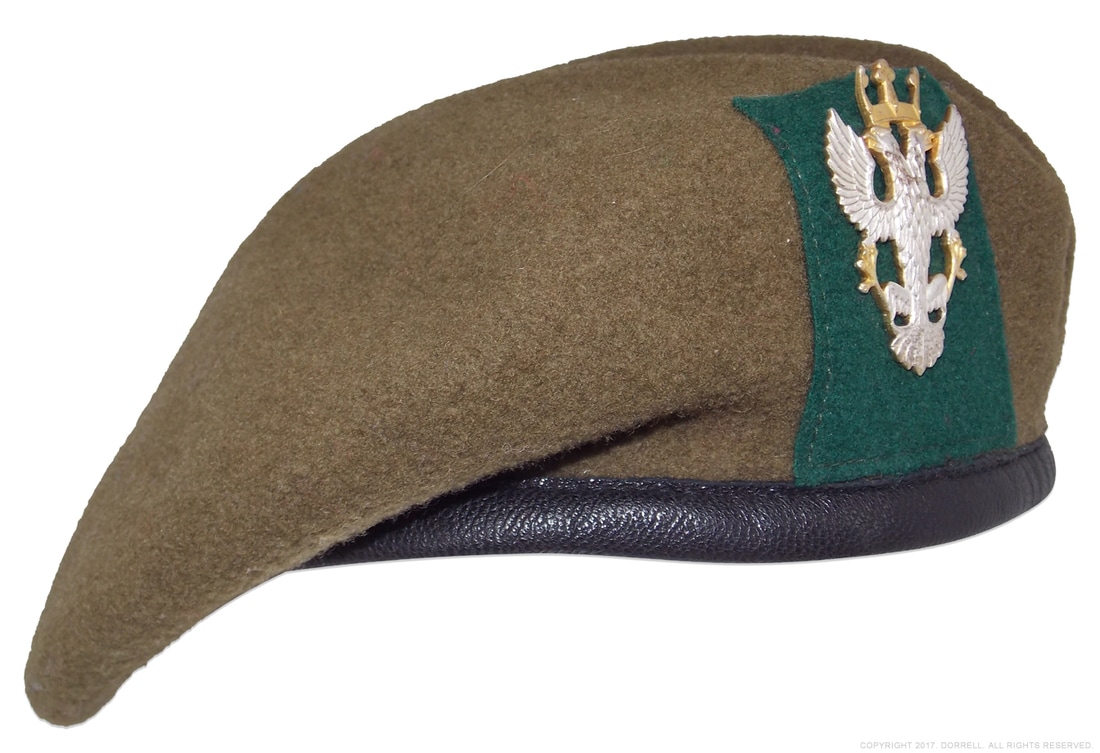 2 Mercian (Worcesters & Foresters) khaki Dress beret.
No. 5 / No. 8 dress beret.
Current issue beret used by Officers (of the rank of Lt. Colonel and below), as well as NCOs and private soldiers. Note the different in Lincoln green bordering to the beret exhibited above.

A senior officer's beret ranking to Substantive Colonel or Brigadier, who previously served with the Mercian Regiment. The beret is a typical issue khaki Mercian beret with green felt badge backing panel, however a Queen's crown Royal Crest badge has been added in place of the silver & gilt Mercian eagle. 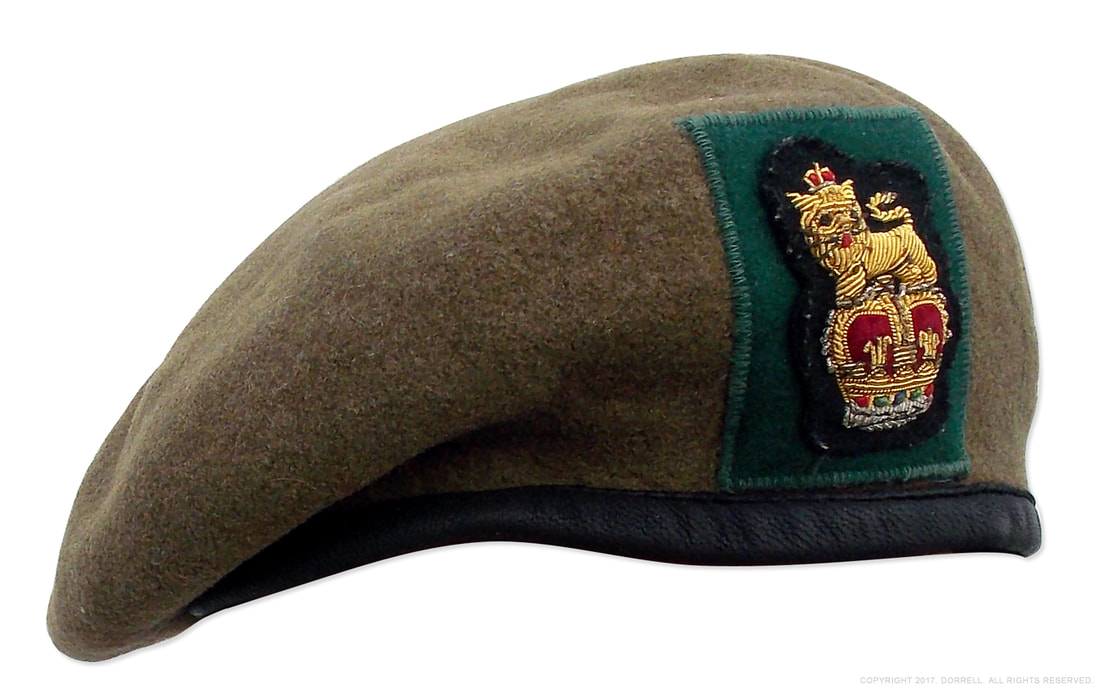 The khaki beret with embroidered Mercian eagle badge was worn by members of the Derbyshire Army Cadet Force, while this particular little grouping belonged to a cadet from a town 7 miles outside Derby. 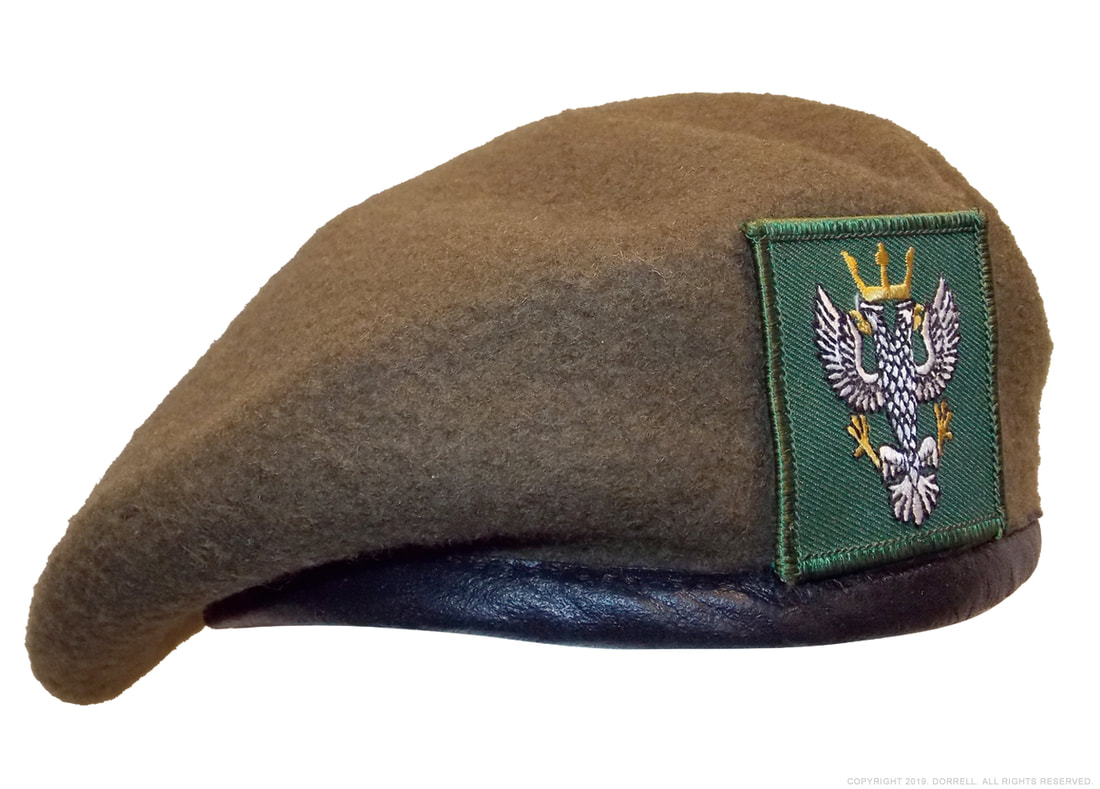 This Mk.6 helmet and beret were used by a soldier of the Mercian Regiment, from 2007 till 2014. Similar to the example exhibited in the Worcestershire & Sherwood Forester Regiment Gallery, this helmet is the first pattern composite helmet issued to the British Infantry.

The shell is green ballistic nylon with a black webbing and padded leather lining. It exhibits a Woodland DPM camo cover, which has been field adapted, as well as the addition of a helmet net. There are no regimental markings present or dates on the helmet.

It is interesting to note that even after the Mk.6a and Mk.7's introduction, these older examples were still being used along side them. 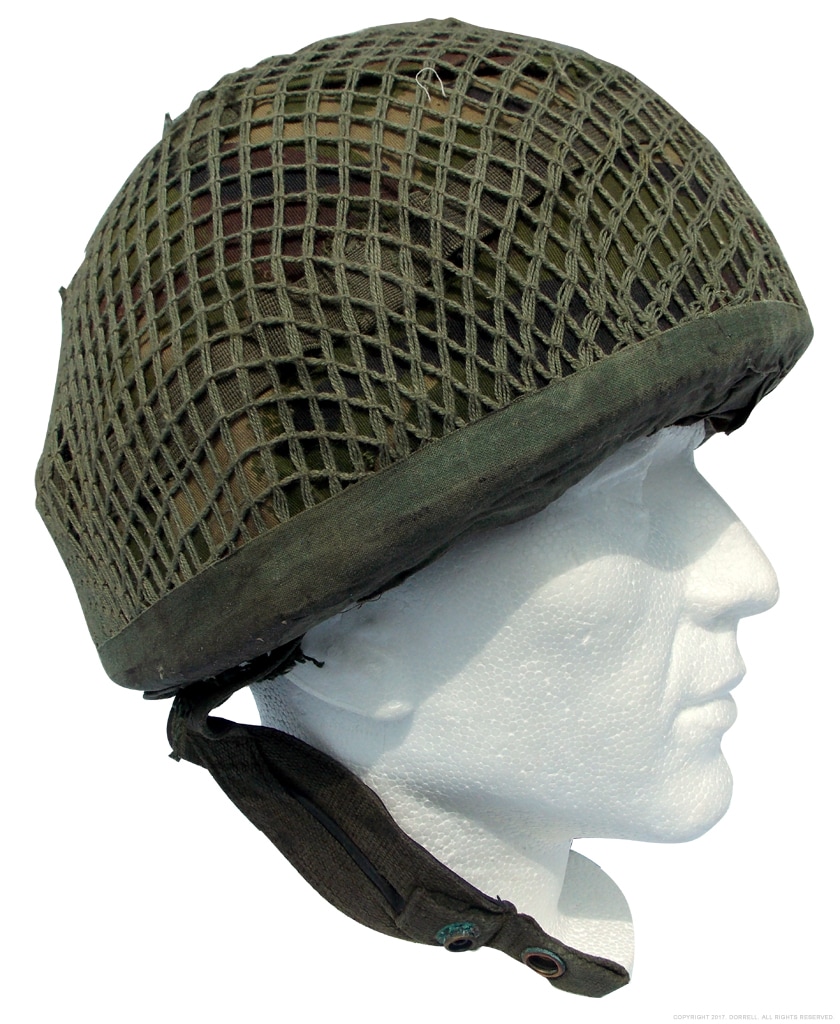 Mk.6 Mercian Regiment combat helmet.
Together with the helmet is an un-issued khaki beret. In such cases the green felt rectangle would have been sewn onto beret by a member of the regiment, and it would then have been shaped before being used. 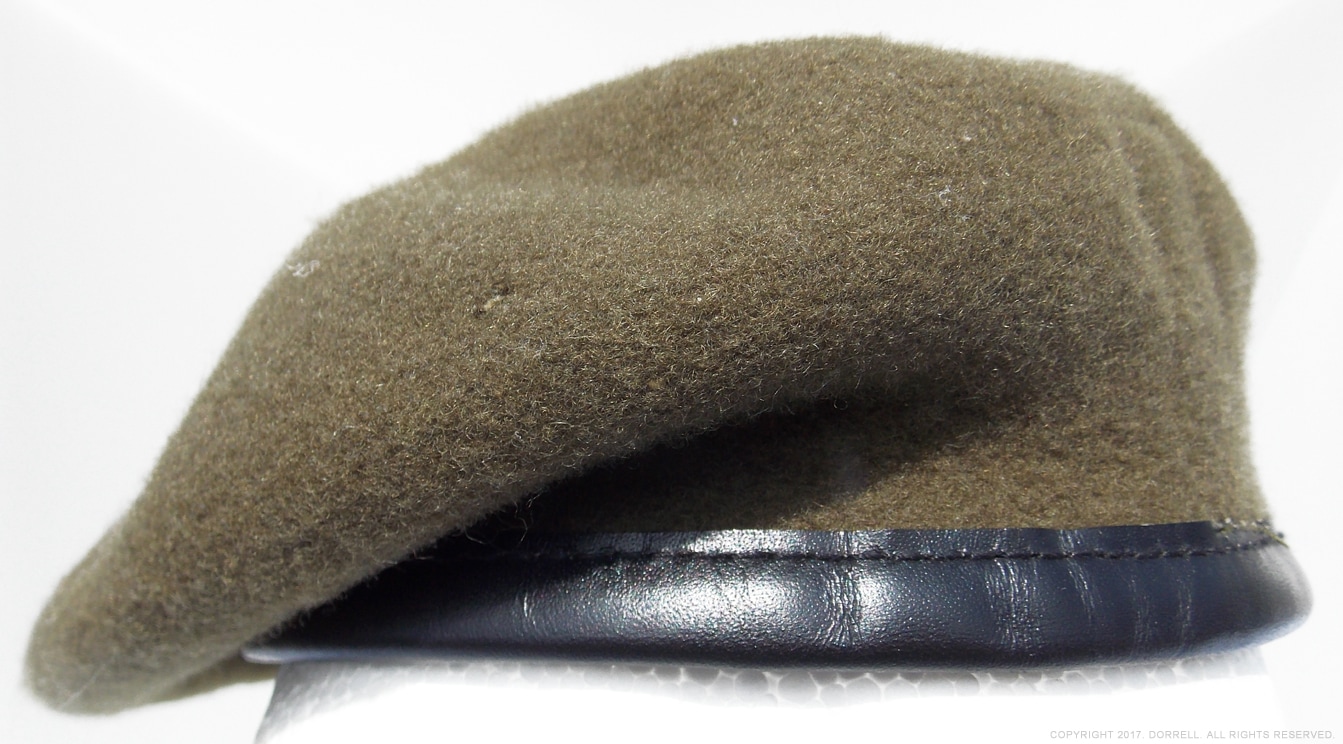 An updated version of the Mk.6, the Mk.6A featured an improved crown lining and better ballistic protection. Its basic appearance however changed little to its predecessor, the major difference being its black finish. The Mk.6A was used from around 2006 before gradually being replaced by the Mk.7 sometime from around 2009/2010.

This named DPM helmet cover exhibits a green diamond flash, a feature well documented in photos of the 2 Mercian on operations in Afghanistan, from 2009, as can be seen in this link. 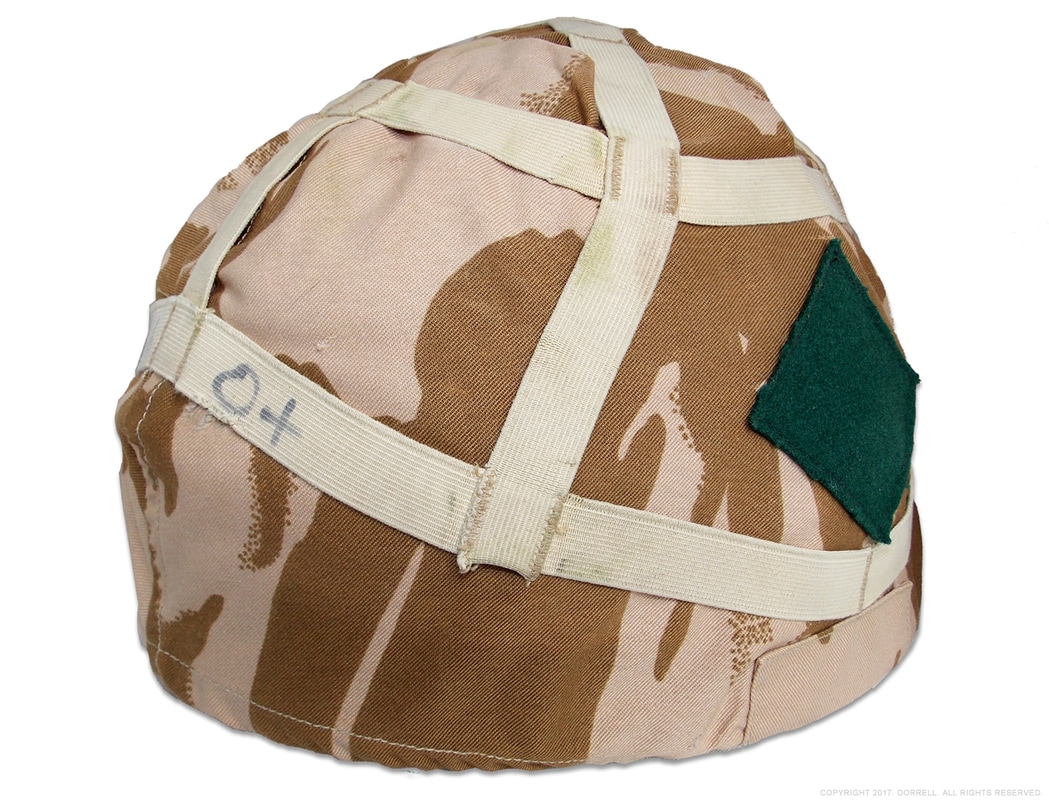 Intended as a replacement to the Mk.6 designated ballistic helmets, the Mk7 was introduced in 2009. Most were fitted with a MTP cover that was often worn with an additional helmet net. This particular Mk7 shows clear signs of operational use, from a few dents at the crown, to its lining, chinstrap and cover. The rim has also been removed and a set of Comfort Pad Kit ear pads added to improve the lining. Of particular interest is the cover that displays a Lincoln green felt diamond patch to the left side, matching closely to the other examples exhibited in the museum. A tradition kept alive from the Worcestershire & Sherwood Forester Regiment. Its foliage straps have also been removed, black netting details added and the cover secured into place by green sniper tape.

This named example most probably belonged to a member of 2 Mercian Assault Pioneers who wore identical unit marked helmets during their Herrick XV tour in Afghanistan in 2011/2012. 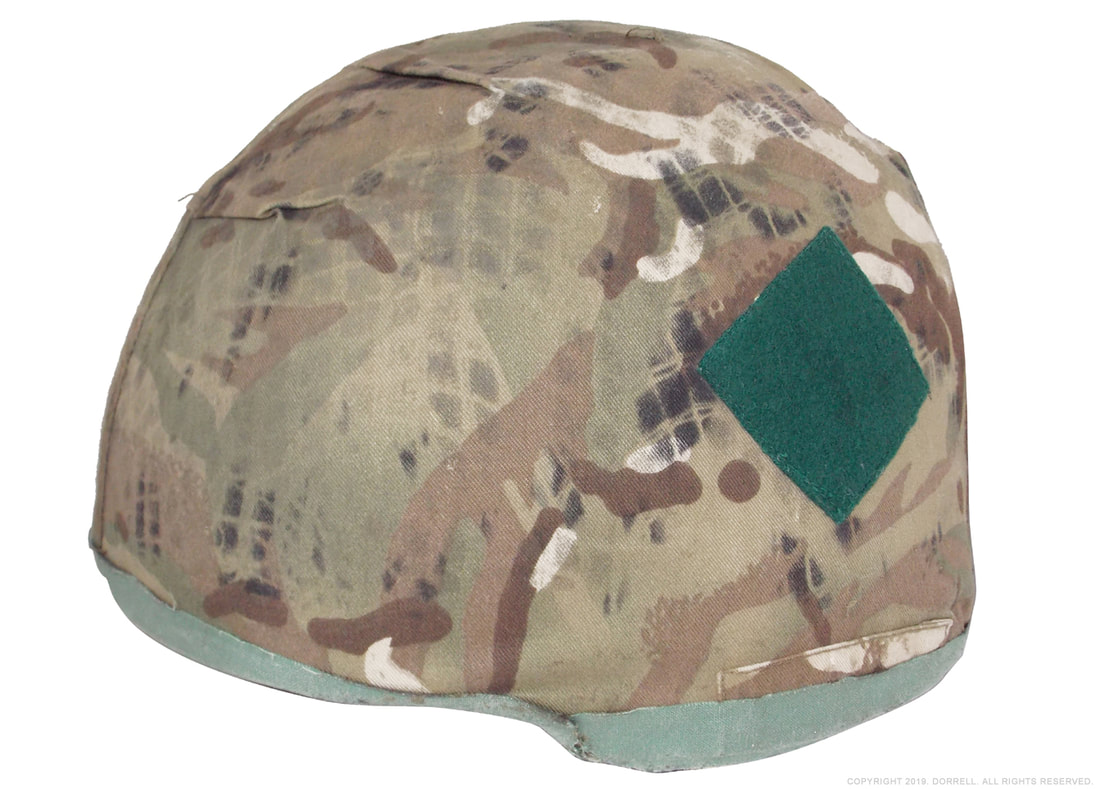